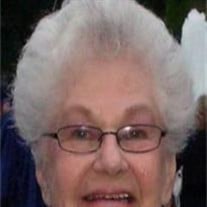 Jean T. Parmet, matriarch and last member of her generation, was born in Philadelphia, Pa. July 2, 1926 to Hannah and Samuel Pollon, passed away Saturday, August 22, 2009. Graveside burial and service will be at Mt. Carmel Cemetery on Sunday, August 23, 2009 at 4:00pm. A celebration of her life will take place at Village Shalom immediately following the burial service. After a year at Wharton School of Finance, she married Norman when he went temporarily AWOL from the army in 1945. They lived in Lincoln, Nebraska and Dover, Delaware before moving to Kansas City in 1949. She raised three talented, dynamic children, all following in her footsteps of community involvement and leadership. Jean returned to graduate school at KU receiving her master’s degree in Social Work and a pioneer in developing the area of case management for geriatrics, now common practice in the field. Jean also participated in her community as a life member of Hadassah, a member of Brandeis, NARAL, ORT, League of Women Voters, B’nai B’rith, NCJW, Federation and Beth Shalom. Jean shared her appreciation of art by serving as docent at the Nelson Atkin’s Museum. She joined a million others in the March for Women’s Lives in Washington, DC in April 2004. Preceded in death by her husband of 58 years, Norman R. Parmet, she is survived by her three children Allen Parmet and his wife Debra, Barbara Parmet and her husband William Edelstein of Santa Barbara California, and Michael Parmet and his wife Mary Alice of Houston, Texas. Jean loved to be in Scottsdale, Arizona in the winter where she painted and played tennis and golf. Her five grandchildren were her delight: Aaron, Daniel, Phillip, Morgan and Kelly. Jean Parmet’s philosophy was simplicity. She said, “How I have lived in life is how I will be remembered.” In lieu of flowers, the family suggests contributions to the charity of one’s choice.

Jean T. Parmet, matriarch and last member of her generation, was born in Philadelphia, Pa. July 2, 1926 to Hannah and Samuel Pollon, passed away Saturday, August 22, 2009. Graveside burial and service will be at Mt. Carmel Cemetery on Sunday,... View Obituary & Service Information

The family of Jean Thelma Parmet created this Life Tributes page to make it easy to share your memories.

Jean T. Parmet, matriarch and last member of her generation,...