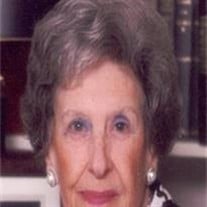 Jeanne Louise Lyon Benjamin of Prairie Village, KS passed away Saturday, October 10, 2009 at her home. Jeanne was born in Kansas City, MO on August 17, 1918. She was the daughter of Helen Griff Lyon and Bert Lyon, both of Kansas City. Jeanne graduated from Sunset Hill School and attended Chevy Chase School in Maryland and Garland Junior College in Boston. Shortly after college, she married the love of her life, David Joel Benjamin, II, and they remained deeply in love until her husband’s untimely death in 1967. Jeanne never remarried. She resided most of her years in Kansas City but did spend eleven wonderful, fulfilling years in San Francisco, where her husband was a senior executive and member of the Board of Directors of Crown Zellerbach Corporation. Upon her husband’s death, Jeanne returned to her native city. After completing her education and during her husband’s service in the Navy during World War II, Jeanne served as a volunteer at the Alfred Benjamin Dispensary, which later became the Jewish and Family and Children’s Services. She also served as a volunteer at Menorah Medical Center. Jeanne’s life was however totally devoted to family. She held the Bert Lyon family together after the premature death of both her mother in 1938 and her brother, Theodore, in 1946. Later she did the same for her own family after her husband’s death. During these tragedies her strength, values and integrity never waivered. She is survived by her adoring sons, David Joel Benjamin, III (Laurie Melcher Benjamin) of Carmel Valley, CA and Bert Lyon Benjamin (Janice Yukon Benjamin) of Kansas City and her four grandchildren, Brett Benjamin of Chicago; Blair Benjamin of New York City; Elizabeth Benjamin of New York City; and David Benjamin of Carmel Valley, CA. Funeral services will be held at 3:00 p.m. on Monday, October 12, at the New Reform Temple, Gregory and Main streets, Kansas City, MO. In lieu of flowers, memorial contributions may be made to KU Endowment for the benefit of The University of Kansas Hospital Breast Cancer Patients in Need; 2330 Shawnee Mission Parkway, Suite 302, Westwood, KS 66205. The family sincerely thanks her devoted caregivers, Lisa McCants, Brandy Cannon, Alegria Cannon, and Kathy Casey Thomas.

Jeanne Louise Lyon Benjamin of Prairie Village, KS passed away Saturday, October 10, 2009 at her home. Jeanne was born in Kansas City, MO on August 17, 1918. She was the daughter of Helen Griff Lyon and Bert Lyon, both of Kansas City. Jeanne... View Obituary & Service Information

The family of Jeanne Louise Lyon Benjamin created this Life Tributes page to make it easy to share your memories.