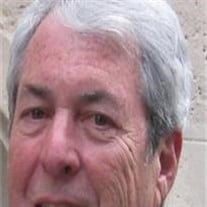 Jim Greenwood, a lifelong resident of Kansas City, passed away peacefully, surrounded by his loving and adoring family on Sunday, February 17, 2013 in Scottsdale, Arizona. Jimmy, as he was affectionately called, was born on August 1, 1945. He graduated from Pembroke Country Day School in 1963 and went on to study at the Wharton School of Finance before earning a bachelor’s degree from the University of Missouri. Well known for tracking investment strategies during his personal and professional time, Jim enjoyed an illustrious career at the Kansas City Board of Trade. Above all else, Jim was a true family man. He relished time with his many close friends, particularly the many racquetball and golf games, and travels across the world. A passionate sports fan and competitor, he was a lifelong Royals fan, a beloved commissioner of fantasy baseball and football leagues, and a consummate bridge and poker player. Respected for his compassion, wit, and humor, Jim dispensed sound advice to friends near and far. Civic minded, Jim served as President of Oakwood Country Club, Treasurer of The Temple, Congregation B’nai Jehudah and President of the Cystic Fibrosis Association. He also served on the Boards of the Kansas City Board of Trade, the Jewish Federation of Greater Kansas City, the Jewish Community Foundation and Jewish Family Services. Memberships included the Society of Fellows of the Nelson-Atkins Museum of Art and Powell Gardens. Jim was preceded in death by his parents, Paul & Marian Katz Greenwood and his father-in-law and mother-in-law, Sidney and Rosalind Ginsburg. He is survived by his wife of 41 years, Sharon; his children, Paul and Sara Greenwood, Allison and Oliver Bajracharya, and Karen Greenwood; his four grandchildren, Dustin, Gavin, Miri, and Leo who called him Papa G; his sister and brother-in law Kathy & Marvin Schenk and Aunt Flossie Pack. He is lovingly remembered by his brothers-in-law and sisters-in-law Byron & Gerri Ginsburg, Ellen & Larry Polsky, and Janey Goodman, his many nieces and nephews as well as his large circle of extended family and friends. The funeral will be held at 2:00pm, Wednesday, February 20 at The Louis Memorial Chapel, 6830 Troost Avenue, with burial at Rose Hill Cemetery to follow. In lieu of flowers, donations may be made to The Temple, Congregation B’nai Jehudah, the Jewish Federation of Greater Kansas City or a charity of one’s choice.

Jim Greenwood, a lifelong resident of Kansas City, passed away peacefully, surrounded by his loving and adoring family on Sunday, February 17, 2013 in Scottsdale, Arizona. Jimmy, as he was affectionately called, was born on August 1, 1945.... View Obituary & Service Information

The family of Jim Greenwood created this Life Tributes page to make it easy to share your memories.

Jim Greenwood, a lifelong resident of Kansas City, passed away...