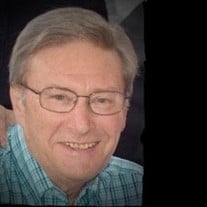 Joel S. Lissauer, 73, passed away April 5, 2018, due to complications from Acute Myeloid Leukemia. His family was by his side and he was surrounded by love. Funeral services will be held at 11:00am Sunday, April 8, 2018 at The Louis Memorial Chapel, 6830 Troost Avenue, Kansas City, MO 64131 with burial to follow at Rose Hill Cemetery. In lieu of flowers, the family suggests contributions to Wayside Waifs at www.waysidewaifs.org, Children’s Mercy at www.childrensmercy.org, or a memorial contribution to the charity of your choice. Joel inspired kindness, smiles and compassion in others, whether it was in his work, spending time with his friends eating barbecue and watching action movies, or spending time with his family. After graduating from the University of Texas with a degree in Aerospace Engineering, he started his career in Houston at NASA and worked on several of the Apollo missions. Some of his accomplishments while at NASA are that he designed the golf club for Alan Shepherd as well as the sleeping hammocks on the shuttles for the astronauts. He also worked on the LEM (Lunar Module) that now is on display at the Smithsonian. After his time at NASA, he moved to the Kansas City area and worked at Harlan Global. He started his own company, L & L Manufacturing, making skylights and eventually moving to fabricating display units for numerous stores around the world. He returned to Harlan Global a few years ago. He was known for his creativity and his ability to design furniture, toys, display cases, aquariums, and decorative items just to name a few. He loved his music and spent time composing, but he most loved spending time with his family, working around the house on various projects with Carol, watching the Dallas Cowboys, or going to quilt stores. He loved attending sports events and musical events for his grandchildren or just having dinner and playing games. Joel was a dear friend to so many, and he always gave of himself without hesitation. He is preceded in death by his parents, George and Phyllis and father-in-law, Herbert William Alport. Joel is survived by his wife Carol, his children David (Sara), Catherine (James), and Jodi (Tim); his grandchildren Leah, Anna, Isaac, Logan, and Grant; and his sister Joyce (Jimmy); mother-in-law, Gustava Alport and many nieces and nephews.

Joel S. Lissauer, 73, passed away April 5, 2018, due to complications from Acute Myeloid Leukemia. His family was by his side and he was surrounded by love. Funeral services will be held at 11:00am Sunday, April 8, 2018 at The Louis Memorial... View Obituary & Service Information

The family of JOEL SIMON LISSAUER created this Life Tributes page to make it easy to share your memories.