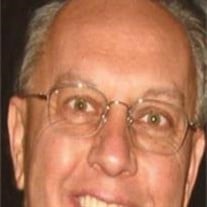 Joel David Grodberg, 59, passed away Saturday, April 30, 2011, in Leavenworth. Visitation will be held on Wednesday, May 4, at 9:30 am at the historic Riverfront Community Center. The funeral service will follow at 11:00 am. Burial will be at the Mount Zion Jewish Cemetery in Leavenworth. The family requests no flowers and suggests that contributions honoring Joel's memory be given to ACS-Kansas City Hope Lodge, 1120 Pennsylvania Avenue, Kansas City, MO 64106 or to St. Luke's Health System Hospice, 920 6th Avenue, Leavenworth, KS 66048. Joel was born February 9, 1952, in Worcester, Massachusetts. He was the oldest son of Marcus and Shirley Grodberg. Joel was raised in Newton, Massachusetts. He graduated from Ohio University with degrees in Economics. At age 25, he moved to Leavenworth to pursue a business opportunity. A successful career followed and Joel was actively involved in professional, community and civic organizations. Joel served as Mayor of Leavenworth and as a City Commissioner. As an active member of Rotary, Joel served as club president and as assistant district governor. Joel strived to help all people and volunteered for numerous local organizations, particularly agencies that served those in need. Joel loved sports and was thrilled to be in attendance when the Boston Red Sox won the World Series. He was a generous supporter of Ohio University and the Ohio Bobcats. However, Joel wanted it known that God's greatest blessing was providing him with a loving wife and children that he adored. Joel is survived by his wife of 16 years, Marianne; his children, Scott Hedge (Tammy), Megan Sibold (Brad) and David Jeannin; two grandchildren, Bridget and Blake; his mother, Shirley Grodberg; two brothers, Kim Grodberg and Jeremy Grodberg. As Joel battled cancer for four years, he was courteous and pragmatic, dignified and non-complaining. His family is truly grateful for the excellent care given to Joel and to them by St. Luke's Cancer Center, University of Kansas Bone Marrow Transplant Program and St. Luke's Hospice of Leavenworth.

Joel David Grodberg, 59, passed away Saturday, April 30, 2011, in Leavenworth. Visitation will be held on Wednesday, May 4, at 9:30 am at the historic Riverfront Community Center. The funeral service will follow at 11:00 am. Burial will be... View Obituary & Service Information

The family of Joel David Grodberg created this Life Tributes page to make it easy to share your memories.