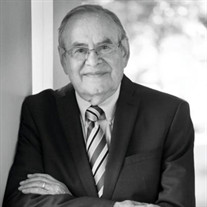 Joseph Kanarek, MD, 94, of Overland Park, Kansas, passed away at the family home on October 29, with the love of his life, Raquel, by his side. The son of Herschel Kanarek and Golda Kanarek, Dr. Kanarek was born on July 23, 1926, in Plonsk, Poland. He was an Auschwitz survivor, a fact that never defined his life, yet motivated him to pursue a career in medicine. While working in the camp infirmary, he promised himself that if he survived, he would dedicate his life to healing others. After US troops liberated him, the then-teenager traveled from Germany to New York, where he attended high school, then Columbia University. He graduated with a degree in medicine from La Universidad Nacional Autonoma de Mexico. While in Mexico, he met Raquel, his wife of 66 years. After graduation, he and his family moved to Kansas City, where he completed his residency at Menorah Medical Center. He joined a thriving pediatric practice and accepted a staff position at the University of Kansas Medical Center. Known by his patients as “Dr. K,” he specialized in treating Cystic Fibrosis during his 58 years in practice. The average lifespan for a child diagnosed with this respiratory disease was only a few years. By the time he retired, at age 89, the average age of his Cystic Fibrosis patients was 30. Dr. Kanarek served as President of the Menorah Medical Center Staff and as Chair of the Pediatrics Department at Baptist Medical Center. He also volunteered at the University of Kansas Medical Center clinic. When he retired, he enjoyed working out at the gym four times a week and spending time with his family, especially Raquel. His love and dedication to her were an inspiration to all. An avid reader, he was a walking encyclopedia. He spoke eight languages: English, Hebrew, Yiddish, German, Spanish, Italian, Russian, and Ukrainian. The last language he studied, at 89 years old, was Chinese. Dr. Kanarek served as a role model to residents and physicians and was a trusted colleague. He built a legacy of kindness, compassion, and determination for healing, that endeared him to his family, friends, patients and the community. He inspired the family he built with Raquel, to live life to the fullest and to help others along the way. He is survived by his wife and family including, five children: Dr. Henry Kanarek (Kristi), Gina Malashock, Lisa Kanarek Kessler (Perry), Eli Kanarek (Amy), and Karla Magee (John); ten grandchildren: Martin Kanarek (Amy), Jeremy Kanarek (Adrianne Farrell) Ethan and Oliver Kanarek, Dr. Hannah Malashock and Kenny Malashock, Kyle Weinstein, Beatrice Mitchell, Samantha Magee, and Joshua Kanarek; and three great-grandchildren: Aveline and Joseph Kanarek Farrell, and Mia Kanarek. If you would like to honor Dr. Kanarek’s memory, please send donations to the Cystic Fibrosis Foundation, The Temple Congregation B’nai Jehudah, or a charity of your choice.

Joseph Kanarek, MD, 94, of Overland Park, Kansas, passed away at the family home on October 29, with the love of his life, Raquel, by his side. The son of Herschel Kanarek and Golda Kanarek, Dr. Kanarek was born on July 23, 1926, in Plonsk,... View Obituary & Service Information

The family of Joseph Kanarek, MD created this Life Tributes page to make it easy to share your memories.