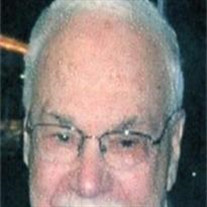 Joseph G. Shalinsky, 96, of Kansas City, KS, passed away Monday, June 24, 2013 at Providence Medical Center. Graveside services will be at 10:00am Wednesday, June 26, at Rose Hill Cemetery. In lieu of flowers, the family suggests contributions to Alzheimer’s Association or the Argentine Activities Association, 3030 Powell, Kansas City, KS 66106 Attn: Linda Cochran. Joseph was born July 6, 1916 the son of Herman and Freda (Iskowitz) Shalinsky. He served as a Lt. Commander in the U.S. Navy during WWII, of the USS LC (FF) 1081, the flagship of the flotilla of LST’s in the Pacific. After returning from the war, Joseph established Shalinsky Drug Company in the late 40’s as the family business, working with his brothers throughout the years. They sold the stores in the early 1980’s and Joseph continued in the pharmacy field until the age of 92. Joseph was a member of The Temple, Congregation B’nai Jehudah. He was Executive Secretary of the Kansas State Board of Pharmacy for 19 years and was President of the National Board of Pharmacy for 9 years. Joseph was the recipient of many honorary awards, most notably the Bowl of Hygeia Award from the Kansas Pharmacy Association. He was the cornerstone of Argentine, KS, serving as leader and member of most organizations in the community. Joseph was a devoted, loving husband, father, grandfather and friend to all. He was preceded in death by his parents; brothers, Lester, Milton, Marvin and Leo Shalinsky and a sister, Eleanor Rutlader. Joseph is survived by his wife of 60 years, Charlotte Shalinsky; sons and daughter-in-law: Robert Shalinsky and Lee and Tama Shalinsky, all of Camdenton, MO; Jonathan Shalinsky, Kansas City, KS; sisters: Zelda Tasman and Harriet Waldman, both of Louisville, KY; grandson, Michael Shalinsky; granddaughter and husband, Jacqueline and Mike Holt; great-grandchildren: Easton and Cannon Holt.

The family of Joseph George Shalinsky created this Life Tributes page to make it easy to share your memories.