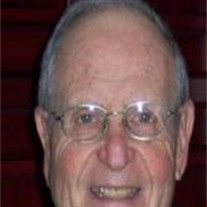 Joseph J. Haith, of Prairie Village, Kansas, at age 85, passed away on Monday, August 3, 2009 at the Kansas City Hospice House. Funeral services will be at 10:00am Wednesday, August 5, 2009 at The Temple, Congregation B’nai Jehudah, 12320 Nall Avenue, Overland Park, Kansas. Burial at Rose Hill Cemetery. Born and raised in Kansas City, Joe graduated from Paseo High School in 1942 and then graduated from The University of Kansas in 1946 with a Bachelors of Business Degree. Joe’s wonderful career as a CPA got off the ground in 1950 when he founded the firm Joseph J. Haith CPA Services. When he first began his practice, Joe met Harry Weinstein who had a bookkeeping service, and soon joined Joe. Three years later, after Harry obtained his CPA license, the firm became Haith & Weinstein CPA Services. Later, Ed Levine was employed at the company, and eventually the firm became Haith, Weinstein & Levine Certified Public Accountants. This firm built a strong reputation of personal services and real estate expertise, and in 1974 merged with the national accounting firm Alexander Grant & Co. Years later, this firm merged with the national accounting firm, Grant Thornton, and Joe, as a key partner there, worked tirelessly to establish its quality presence in this community. Joe held the distinction of being a small business specialist known as the “Business Doctor” and someone who helped “sick” companies recover from their financial illnesses. There are many grateful Kansas City businesses he helped in the over four decades of his professional practice. Young partners and managers always appreciated the willingness and enthusiasm of Joe in sharing his practice development techniques and business contacts. Even though he officially retired from Grant Thornton in 1985, Joe continued to go to the office every day until just before his recent sudden illness. Joe was a 50 year honorary member of the American Institute of CPA’s, and a Member of Missouri Society of CPA’s. Joe was also instrumental in the formation of Haith & Company Real Estate Services, where he helped his sons, Larry and Myron, establish themselves and where he remained an invaluable source of good advice and guidance. Joe was preceded in death by his parents Abe and Bessie Haith and his sister Cecelia Robinson. Joe is survived by his high school sweetheart, Hortense Rae, to whom he was happily married for 62 years and remained the love of his life. He called her “HR”, but she was officially known as HRH “Her Royal Highness” whom he adored. Joe and Hortense were the cutest couple and enjoyed going to Royals, Chiefs and KU basketball games. They were regulars at the Missouri Repertory Theatre and the Kansas City Symphony. They also enjoyed many travels together and with their family. Joe is also survived by his two sons, Larry and Myron, his daughter Rosalie and his daughters in law Randi Haith and Linda Steeves-Haith, and their families’ grandchildren Amy and Peter Shapiro, Erin and Ben Nathan, Zac Haith, Joshua Haith, Jaclyn Haith, Zane Haith, Ben Conley and Jason Conley, and great grandchildren Sophie Shapiro, Emma Shapiro and Eli Nathan. Joe was a past member of Meadowbrook Country Club, joining there in 1954. Joe was also a past Treasurer of Kehilath Israel Synagogue in Overland Park, Kansas. As a member of The Temple, Congregation B’nai Jehudah, Joe truly especially enjoyed attending Friday night Shabbat services and the camaraderie with the Rabbi’s, Cantor and all the members of the congregation. Most of all, Joe cherished his years of life with his family, his wife “HR”, and his many friends and business associates. During his short illness and stay at Kansas City Hospice, it was incredible the number of family and friends who came by to visit, reminisce, and honor Joe. Joe will be remembered as having a twinkle in his eye, a great sense of humor, and an infectious smile. He will be sadly missed by all who knew him. The family suggests contributions to Rabbi Arthur Nemitoff’s Discretionary Fund, c/o The Temple, Congregation B’nai Jehudah, 12320 Nall Avenue, Overland Park, Kansas 66209 or Kansas City Hospice House, 12000 Wornall Road, Kansas City, MO 64145.

Joseph J. Haith, of Prairie Village, Kansas, at age 85, passed away on Monday, August 3, 2009 at the Kansas City Hospice House. Funeral services will be at 10:00am Wednesday, August 5, 2009 at The Temple, Congregation B’nai Jehudah, 12320 Nall... View Obituary & Service Information

The family of Joseph J. Haith created this Life Tributes page to make it easy to share your memories.