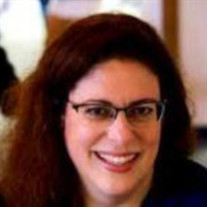 Joshana Offenbach, J. D., died on Monday, May 17, 2021, after an eight-month battle with cancer. She was born in Newport News, Virginia, on February 29, 1972. She will be greatly missed by her parents, Carol and Dr. Stefan Offenbach, and other relatives and friends. Graduating from Washburn School of Law in 2007, she was first employed by the Kansas Board of Healing Arts and then by Scharnhorst Ast Kennard Griffin PC. She had the rare ability to make friends wherever she was, and many have now reached out to support her parents in their grief. She loved her job at SAKG, learning from other attorneys, being mentored by the senior attorneys, and helping a myriad of clients. Law was more than merely employment for her—it was a source of meaning, which she valued highly. Joshana liked traveling. She visited more than thirty countries in her life. Her particular favorites were Italy, where she spent a week in Florence in March 2019, and New Zealand, where she spent two weeks in October 2016. She liked going on walks in the various places, such as walking around Lake Bled in Slovenia or over the Charles Bridge in Prague. Even after she was diagnosed, she was still interested in planning trips and was looking forward to driving along the Ring Road in Iceland. Friends were her principal passion. She still had friends from grade school, high school, college, and religious school. She worked as a unit secretary at Olathe Medical Center and retained a close relationship with other employees including doctors and nurses. She had new friends both from law school and her two places of legal employment. She made friends easily and was fiercely loyal to them, going out of her way to help them whenever she could. Her smile and laughter will be remembered by many. Graveside services were held on Friday, May 21, 2021 at New Mount Sinai Cemetery (St. Louis, Missouri) where she was buried near her beloved brother, Shalon, who died in 1994 from cancer. A memorial tribute to her will be held at Congregation Ohev Sholom (5311 W. 75th Street; Prairie Village, KS 66208) on Sunday, June 27, 2021 at 2 P.M. Friends are invited to come and share their memories of Joshana. If you wish to make a donation in her memory, The Joshana Offenbach Fund (to provide financial aid for women diagnosed with cancer) has been established at the Jewish Community Foundation (5801 W. 115th Street; Overland Park, KS 66211).

Joshana Offenbach, J. D., died on Monday, May 17, 2021, after an eight-month battle with cancer. She was born in Newport News, Virginia, on February 29, 1972. She will be greatly missed by her parents, Carol and Dr. Stefan Offenbach, and... View Obituary & Service Information

The family of Joshana Offenbach created this Life Tributes page to make it easy to share your memories.