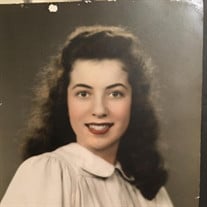 Judith Fremerman died peacefully at home on the afternoon of July 1, 2020. Born during the Great Depression in Brooklyn NY to Sara and Joseph Block on April 17th, 1931, Judy absorbed the depression’s lessons to be frugal and conserve while growing up in both Brooklyn and Miami. From an early age Judy demonstrated remarkable artistic talent and studied art at the University of Miami where she met her husband Bernie and married at 19. Three children were born in rapid succession; a daughter, a son and a daughter, but the son, who was premature only survived a few days. Judy and Bernie put down permanent roots in Kansas City and had a fourth child, a daughter. Many marriages don’t survive the loss of a child but Judy’s marriage lasted 69 years until his death April 18th. Judy’s devotion to Bernie was evident in the care she gave him and was noted by the hospice nurse, who felt Bernie was what kept Judy alive for six years after diagnosis with three egregiously leaky heart valves, untreatable A-fib and heart failure. Judy was a tireless advocate for her daughters, seeking innovative educational opportunities for them. She embraced new ideas to advance health and well-being like natural childbirth and breastfeeding in the early 1960s -- when hardly anyone was discussing these. She found her life’s passion when she attended a public lecture by Dr. Helen Billings on the Montessori Method and became committed to facilitating the self-actualization and intellectual achievement in children based upon the work of Dr. Maria Montessori. In the 70’s, Judy found value in the EST training and made it available to her children and she facilitated many educational opportunities for her children and grandchildren. She also became a proponent of Macrobiotics after it improved her health. Following her introduction to Montessori, Judy defied naysayers by opening a Montessori school in Leawood, Ks in 1967. Few had heard of Montessori then and she didn’t know a single woman who had started her own business. The school was very successful growing until it maxed out its capacity. She sold that school when convinced an economic downturn was coming which would undermine the market for preschools. Then Judy got her real estate license – demonstrating again persistence and personal grit. She took the real estate exam three times before finally passing. But sales did not hold her interest. By then it had become apparent that economic forces didn’t negate the need for preschools, because as more mothers had to work, preschools that also offered daycare thrived. Judy went back to follow her passion – opening her second Montessori School. This time cutting a deal with Crown Center to provide her space in order to offer on-site daycare as a benefit to employees. With retirement, Judy took up painting again and loved painting her grandchildren as she had her children. (Pictures of Judy’s artwork and other family pictures can be seen at: https://www.echovita.com/us/obituaries/mo/kansas-city/judith-phyllis-fremerman-11082054 ) As Judy got older a heart murmur diagnosed as a young woman turned into leaky heart valves and A-fib. Though Judy had a healthy skepticism of medical treatments, she had a passion to stay alive. For several years she submitted to procedures and drugs she did not like – enduring increasingly unpleasant side effects until about 3 years ago, she went against medical advice and quit taking the medications she hated. Her cardiologist told her to find a new doctor. Not only did Judy live longer than expected, she felt much better then when she was on the drugs. As Judy’s health declined her expressions of gratitude increased, and her fierce desire to stay alive never wavered. She pushed herself to do everything she could, inspiring those around her. Judy had many wonderful caregivers over her last few years, but was especially fond of Chrissy who showed amazing dedication, compassion and a joyful attitude throughout her last months. Judy leaves behind three grown daughters, Kerry Fremerman, Leslie Fanelli and her husband Gregory Matthews and JoAnn Farb and her husband Joe Farb, three grandchildren, Joe Fanelli, Sarina Farb and Samantha Farb and many cousins, nieces, nephews and friends who will miss her love and passionate perspective on so many things. A small graveside burial took place at Mount Carmel on July 3. Because only ten were permitted to attend, the family would appreciate you sharing pictures and remembrances on the site linked to above. Donations in Judy’s memory can be made to Topeka Heartland Hospice, JewishVeg.com or the Physicians Committee for Responsible Medicine.

Judith Fremerman died peacefully at home on the afternoon of July 1, 2020. Born during the Great Depression in Brooklyn NY to Sara and Joseph Block on April 17th, 1931, Judy absorbed the depression&#8217;s lessons to be frugal and conserve while... View Obituary & Service Information

The family of Judith Phyllis Fremerman created this Life Tributes page to make it easy to share your memories.

Judith Fremerman died peacefully at home on the afternoon of...