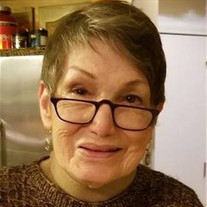 Judy Rae Bell, 81, passed away on May 2, 2019. Judy was born to Betty and Carl Nusbaum on October 30, 1937 at Menorah Hospital in Kansas City, Missouri. She attended Central Junior High School, transferred to Paseo, and graduated from Southwest High School in 1955. During high school, Judy was involved in B’nai Brith and Young Judea, while dedicating her time as a volunteer in the X-Ray Department at Menorah Hospital. In 1957, Judy married Martin Bell and continued her university studies, ultimately obtaining her degree in Elementary Education at the University of Missouri-Kansas City. At UMKC, she was a founding member of Jewish Students and eventually president. She was also president of the Professional Teachers Training for two terms, and a member of student council. Upon graduation, Judy taught at Border Star Elementary for two years. Judy returned to school for her graduate degree in counseling and guidance, graduating in the spring of 1970. While in graduate school, Judy wrote three plays for the school of education. Upon graduation, Judy started a testing business with Gerie Minkin to diagnose children with learning disabilities. At Congregation Beth Shalom, she taught Sunday school for 30 years and Hebrew High for ten. At the JCC, Judy taught preschool for ten years, and during summers served as the director of Funtime Camp. Judy started JD Imports with Doris Flam, worked at Theatre League in group sales, and later started Group Box Office. Thereafter, Judy worked as the program director for KI Synagogue, House of Lloyd, and Harvesters, from which she had to retire due to illness. Judy was active in Beth Shalom Sisterhood, serving on the board and becoming a life member. She wrote skits for the Sisterhood as well as three fundraising programs for Congregation Beth Shalom, where she also served on the board. Judy was a volunteer at the American Cancer Society. Judy is preceded in death by her parents, Betty and Carl Nusbaum. Judy is survived by her children Carla and Scott Oppenheimer, Stacey Bell, Jamie and Jeff Wordsworth, and Brian and Sheri Bell, all of Kansas City, as well as ten grand children: Samantha, Benjamin and Linzi Oppenheimer, Alina Bell, Kyle, Abby and Brady Wordsworth, Jake, Natalie and Madi Bell. Funeral services will be held at 3:30pm Sunday, May 5, 2019 at the Louis Memorial Chapel with burial at Mount Carmel Cemetery. In lieu of flowers, contributions may be made to a charity of one’s choice.

Judy Rae Bell, 81, passed away on May 2, 2019. Judy was born to Betty and Carl Nusbaum on October 30, 1937 at Menorah Hospital in Kansas City, Missouri. She attended Central Junior High School, transferred to Paseo, and graduated from Southwest... View Obituary & Service Information

The family of Judy Rae Bell created this Life Tributes page to make it easy to share your memories.