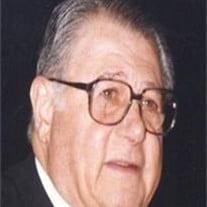 Justin David (JD) Mooney, 81, passed away on May 23, 2013 with his family at his bedside in Overland Park, KS. He was born on February 21, 1932 in Kansas City, MO to Dr. Justin Loeb Mooney and Phoebe Lighton Mooney. JD grew up in Mission Hills, KS where he graduated from Shawnee Mission North. After high school, he attended the University of Michigan where he earned both his BBA and MBA in Accounting. Between undergraduate and graduate school JD served in the U.S. Army during the Korean War. After graduation he began work for Woolf Brothers, initially as a buyer and then as assistant to the President. In 1971, he took over the Mission Inn Motel management and remained its Manager/Owner until 1991 when he retired. In 1958, JD married Alayne Kohn in Kansas City, MO and they were happily married for 55 years. JD was a lifelong member of The Temple, Congregation B'nai Jehudah, where he served as President of the Brotherhood and received the Man of the Year Award. Additionally, JD was a long-time (and Honorary) member of the Temple's Board of Directors. JD was involved in many other areas of service where he was highly recognized and received numerous awards and honors including: the Kansas City's Chamber of Commerce Hall of Fame (1972), Hotel Man of the Year (1980 & 1981) and three other life awards. JD can be found in the Marquis Who's Who in Finance and Industry. JD was preceded in death by his parents, his brother Herbert M. Mooney and his sister Phoebe Ann Mooney. He is survived by his much beloved spouse, Alayne; his daughter Jo Ann Mooney (David Spake), his son, David Mooney (Barbara) and granddaughters, Hannah Rose Mooney and Avery Spake. Funeral services will be held at The Temple, Congregation B'nai Jehudah, 12320 Nall Ave, Overland Park, KS on Sunday, May 26 at 2:30pm. Interment will follow at Rose Hill Cemetery. In lieu of flowers the family requests memorial donations be made to The Temple, Congregation B'nai Jehudah or the J.D. Mooney Scholarship at the Hotel & Lodging Association of Greater Kansas City, 1600 Genessee St., Ste. 603, Kansas City, MO 64102 or the charity of one's choice.

Justin David (JD) Mooney, 81, passed away on May 23, 2013 with his family at his bedside in Overland Park, KS. He was born on February 21, 1932 in Kansas City, MO to Dr. Justin Loeb Mooney and Phoebe Lighton Mooney. JD grew up in Mission Hills,... View Obituary & Service Information

The family of Justin David (JD) Mooney created this Life Tributes page to make it easy to share your memories.