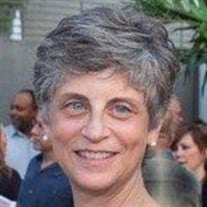 Karin Diane Lichterman, 69, of Leawood, Kansas passed away on April 8, 2022. There will be no funeral service; a memorial will be planned in the future. Karin was born May 8, 1952, in Kansas City, MO to Charles and Beverly Lichterman. She attended Ruhl Elementary, Bingham Junior High and Southwest High School, where she was voted Most Humorous Girl in her graduating year, 1970. She was an active member of the B’nai Brith Youth Organization (BBYO), including as a Yom Kippur Queen candidate and Sweetheart of Hatikvah AZA. After high school, karin (because she always used a lower case “k” to spell her name) attended UMKC. She met her future husband, Mark Edelman, at a matinee at the Bijou Cinema in Westport, where karin operated the projector, sold the tickets and ran the concession stand. In 1975, karin and Mark moved together to Bucks County, Pennsylvania, then on to Chicago, St Louis and finally Kansas City, where the couple returned to create Theater League, a not-for-profit organization that presented touring Broadway theatre in Kansas City and communities around the country. Karin and Mark traveled together on “the Road,” the circuit of touring Broadway theaters, where Mark worked and karin charmed and befriended everyone she met. Karin and Mark raised two wonderful children, Charles Jacob (CJ) and Risa. Karin provided at-home day care for a lucky few and was a beloved preschool teacher at the Jewish Community Center and Beth Shalom. When her children were older, karin took a job as a loan officer at Avila University, which she enjoyed a great deal. Karin was an accomplished card game- and puzzle-player, setting the record for championships in the family’s twenty-two-year annual Oh Hell! tournament. Luckily for Mark, karin loved the theater; they attended as many as forty plays and musicals a year, most of them on Broadway. Karin was a bright, loving, positive light in the lives of her family, friends and everyone who got to meet her. Karin was preceded in death by her parents, Chuck and Bev. She is survived by husband Mark of the home; son CJ and his wife Swathy Mudhagouni and daughter Risa and her husband Will Cooper, all of Alexandria, VA; as well as siblings, cousins, nephews and nieces who loved karin dearly. In lieu of flowers, please consider a donation to Ukraine refugee relief organizations. Mourners are invited to post their thoughts on Karin’s Facebook page.

Karin Diane Lichterman, 69, of Leawood, Kansas passed away on April 8, 2022. There will be no funeral service; a memorial will be planned in the future. Karin was born May 8, 1952, in Kansas City, MO to Charles and Beverly Lichterman.... View Obituary & Service Information

The family of Karin Diane Lichterman created this Life Tributes page to make it easy to share your memories.

Karin Diane Lichterman, 69, of Leawood, Kansas passed away on...