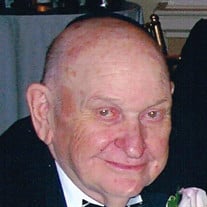 Labe Asner, 93, of Leawood, Kansas, passed away peacefully on Wednesday, January 18, 2017. Labe was a force to be reckoned with. He was simultaneously a master of charm and biting wit. He was born in Kansas City, Kansas on May 5, 1923, the fourth of five children to Morris and Lizzie Asner. He graduated from Wyandotte High School. Labe proudly served in the Army in World War II. The Army sent him to the University of California at Berkeley to attend classes to prepare him for his duties as a codebreaker. Following the war, he returned home to Kansas City and joined the family business, Asner Iron & Metal, which he had continued to operate with his son-in-law Buzzah Feingold. Labe met Gloria Anisman, the love of his life, at Ohev Sholom during High Holiday services in 1946 while she was attending William Jewell College. They married in 1948 and remained married for 61 years, until her death in 2009. Labe’s unrelenting love was focused on his Gloria, his three children and being a very proud “Papa” to seven grandchildren and seven great grandchildren. It is said that the greatest gift a father can give to his children is to love their mother, and Labe did that unconditionally. Labe was also a gifted card player and was known as the best gin rummy player in Kansas City. He was a sports fanatic and was a Royals season ticket holder, attending over 3,000 games. He had an encyclopedic knowledge of baseball and would challenge anyone who tried to rival him. Labe was a good athlete and took up tennis later in life, making up for his late start with his ambidexterity. He was a staunch supporter of Congregation Ohev Sholom and the State of Israel. Labe was preceded in death by his wife Gloria Anisman Asner; his parents, Morris and Lizzie Asner; and his siblings Ben Asner, Eve Asner, and Esther Edelman. He is survived by his son and daughter-in-law, Scott and Susan Asner; daughter and son-in-law, Lisa and Buzzah Feingold; daughter Marci Asner; brother Ed Asner; grandchildren, Lindsay Asner, Darby Asner, Zachary and Jessica Feingold, Emily Feingold, Carly Feingold and Marc Hustvedt; and great-grandchildren, Luke, Lily, Sadie, Leo, Tessa, Maverick (aka Little Labe) and Edie; and many loving nieces, nephews, cousins and friends. The family wishes to express its loving thanks to Labe’s many caregivers over the past year. Funeral services will be held at 12 p.m., Sunday, January 22, at Congregation Ohev Sholom, 5211 West 75th Street, Prairie Village, KS 66208. Burial at Sheffield Cemetery. Kindly omit flowers and food; the family suggests contributions to Ohev Sholom Synagogue or a charity of your choice. In celebration of Labe’s long and wonderful life, please feel free to wear Royals gear to the funeral. Labe was one of a kind and will be missed by all. FAMILY REQUESTS NO FOOD ANYWHERE

Labe Asner, 93, of Leawood, Kansas, passed away peacefully on Wednesday, January 18, 2017. Labe was a force to be reckoned with. He was simultaneously a master of charm and biting wit. He was born in Kansas City, Kansas on May 5, 1923,... View Obituary & Service Information

The family of LABE ASNER created this Life Tributes page to make it easy to share your memories.

Labe Asner, 93, of Leawood, Kansas, passed away peacefully on...