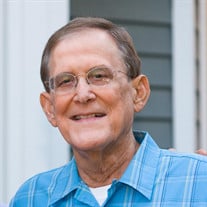 Lawrence Stanford Blumenthal (“Larry”) passed away peacefully on April 18, 2018, just under a month before his 82nd birthday. He is survived by his son Randall Blumenthal and daughter-in-law, Sabra Krock, of New York, and by three adoring grandchildren, Max Blumenthal, Louis Blumenthal and Henry Blumenthal. He is also survived by his brother, Michael Blumenthal, and sister-in-law, Sharon Blumenthal, of Kansas City. He was predeceased by his beloved daughter, Amy Blumenthal, who passed away suddenly four years ago at the age of 47. Larry was born in Kansas City, Missouri on May 13, 1936, graduating from Pembroke Hill School in 1954 and the University of Pennsylvania in 1958. He returned to Kansas City after college to join the family business, Gelhaar Uniform Company, a manufacturer of uniforms for the military, police, marching bands and other disciplines, and ran that business with his brother until 1975. At that time, with the general shift in apparel manufacturing to overseas markets, he and his brother started a new company, Union Jacks, to design and import uniforms and accessories for soccer, softball and other team sports. His employees and customers over the years were particularly moved by his ability to connect with them on both emotional and analytical levels. He was also a lifelong artist, drawing comics for The Daily Pennsylvanian as an undergraduate, teaching pottery at the Kansas City Art Institute and serving as a mentor at the KC Clay Guild. Over many years, he applied his innate, effective judge of character, artistic ability and prescient business instinct to his many successful endeavors. A true relationship builder, he drew people in and selflessly offered guidance and friendship to those around him. He had an energetic demeanor and generous character, as evidenced by his loving family and many friends. He was a passionate observer of painting, sculpture and modern architecture. A reflection of the workings of his inner being is evident in a favorite painting, which he saw on a recent visit to the Whitney Museum of American Art, on Gansevoort Street in New York. The piece is a massive, startlingly colorful oil painting that is extraordinarily vibrant. He insisted on several photos of himself adjacent to the work. Larry’s three grandchildren provided him immeasurable joy and assured him that his genes and name would continue for many generations. He could light up a room with his quick, dry wit and will be dearly missed by his family and friends. The memorial service to celebrate the life of Larry Blumenthal will be held at 12:00 pm on Friday, April 20, 2018 at The Temple, Congregation B’nai Jehudah, 12320 Nall Avenue, Overland Park, KS. A private graveside service for family will be held the same day at Rose Hill Cemetery in Kansas City, MO. Should friends so desire, in lieu of flowers, contributions may be made to The Temple, Congregation B’nai Jehudah.

Lawrence Stanford Blumenthal (&#8220;Larry&#8221;) passed away peacefully on April 18, 2018, just under a month before his 82nd birthday. He is survived by his son Randall Blumenthal and daughter-in-law, Sabra Krock, of New York, and by three... View Obituary & Service Information

The family of LAWRENCE "LARRY" STANFORD BLUMENTHAL created this Life Tributes page to make it easy to share your memories.