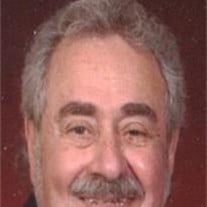 Lawrence Bronstein, 69, of Kansas City, MO, passed away Sunday, June 10, 2012 at the University of Kansas Medical Center. Funeral services will be at 3:00pm Tuesday, June 12, at The Louis Memorial Chapel, 6830 Troost Avenue, Kansas City, MO 64131, with burial to follow at Mt. Carmel Cemetery. In lieu of flowers, the family suggests contributions to Wayside Waifs. Lawrence was born in Brooklyn, NY, the son of Ben M. and Ida Bronstein. He lived in Kansas City most of his life, attending Center schools, and graduating from Center High School. Lawrence was in the U.S. Army in the late 1960’s, serving in Germany. He was a lifelong salesman working in the broadcast communications industry for approximately 16 years. Lawrence married Velva Daniels 14 years ago, after a long distance friendship of more than eight years. He and Velva enjoyed traveling, driving his sports car, caring for their four+ cats and he looked forward to his retiring but would have missed working with his customers and co-workers. Lawrence loved his extended family of nephews, and loved participating in their activities. He was preceded in death by his parents. Lawrence is survived by his wife of 14 years, Velva Bronstein, of the home; brother and sister-in-law: Ron and Barbara Bronstein, Leawood, KS; his father-in-law and mother-in-law: Charles and Christine Daniels, Majestic, KY; brothers-in-law and sisters-in-law: Marshall and Marsha Daniels, Majestic, KY; Randall and Loraine Kennedy, Cleveland, N.C.; nephews: David, Morris and Charles Bronstein. Many other family members, friends and nieces also survive.

The family of Lawrence Bronstein created this Life Tributes page to make it easy to share your memories.