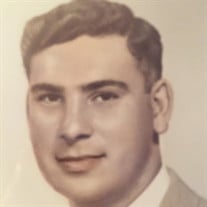 Lawrence (Larry) Martasin, 83, of Overland Park, Kansas, passed away March 3, 2017. Graveside services will be held at 3:30 p.m. Sunday, March 5, 2017 at Mt. Carmel Cemetery. Kindly omit flowers; the family suggests that contributions be made to the American Heart Association, the American Cancer Society, or the charity of your choice. He was born June 30th, 1933, to the late Dave and Kathleen Martasin, in Kansas City, MO. He graduated from Central High School in 1951. He met his future wife and the love of his life, Lynnette Gastman Martasin at the Jewish Community Center in Kansas City when they were 14 years old. Larry and Lynnette were married in 1954 and lived in Kansas City and Dallas before retiring to Sun City Center, Florida. He recently moved back to Overland Park last year to be closer to his family. Larry served in United States Air Force from 1953 to 1957 and was a member of the Jewish War Veterans. He was also a 32nd Degree Mason and received a 50 year award. He was a member of the Scottish Rite and the Shriners and participated in many of their events. He held many jobs in the restaurant industry during his career working for several large chain restaurants and later owned his own barbecue restaurant in Dallas for many years. He was an avid sports fan, enjoyed investing, and traveled with Lynnette on many cruises. He was preceded in death by his wife of 61 years, Lynnette Martasin, and his parents, Dave and Kathleen Martasin. Larry was a loving husband, father, grandfather, and uncle. He is survived by his sons, Elliot Martasin of Lawrence, KS; Jeffrey Martasin and daughter-in-law Debra of Overland Park, KS; beloved granddaughter Laura Martasin, and many nieces and nephews.

The family of LAWRENCE MARTASIN created this Life Tributes page to make it easy to share your memories.