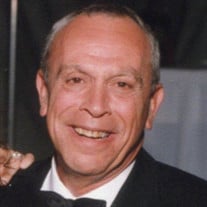 Lawrence Armand Weiner was born September 10, 1940, in Kansas City, Missouri to Ethel and Nathan Weiner. 3 siblings survive Larry. Sandy Tobias (Dallas, Texas), Terri (Zuckerman) Feldman ( White Plains, NY) and Stanford Weiner (Minneapolis, Min). Larry is survived by his wife of 57 years, Joni Weiner of Leawood, Ks. and their children Mitch Weiner (NKC,MO.), Brad Weiner ( died 1985),Todd Weiner (KCMO) and Samantha Weiner Hammontree (Leawood, Ks.) and their grandkids Vincent Freeman (30), Destiny Freeman (27), Braxton Hammontree (19), Ethan Weiner (17), Mackenzie Hammontree (16), Nathan Weiner (11), Sasha Weiner (9). Larry Weiner Grew up in the heart of Kansas City Mo., Brookside. He attended Border Star Elementary school, and was a graduate of the 1958 class at Southwest High school. After graduating High School Larry went straight to work with his father Nathan Weiner. Filling gum ball machines around the city and sporting a bowtie while being the “soda jerk” at the infamous Katz Drug at 63rd and Brookside would serve to open up his world as his father and mother would prepare him for greatness. But before that could happen he would live out a fairytale and marry his sweetheart, Joni Diester also of Brookside. She would be the angelic divine rod to help keep him on path and give him true support for his difficult journey that would await them both. They were a team. Ying and Yang. It was a beautiful thing to see and watch. She was the apple of his eye!!!!! and likewise! They would frequent Winstead’s on the Plaza as youths and always have that burger and fry craving. He would request it usually for his first meal back from his Orient trips. Larry would love to travel nationally and eventually internationally throughout the year. They loved to travel to the Ozarks when the kids were younger and then to places like Las Vegas and Miami, Florida. Larry and Joni loved to travel with friends and family and even took annual sibling vacations starting in their 40’s. Larry believed in Philanthropy. He gave generously to places like the JFC’s Brookside Food Pantry or, BV CAPS, or the expansion of the “The J” AKA Jewish Community Center and even the Weiner Religious School at Temple Beth Torah. Raising 3 boys born in the span 35 months and then finally getting his Princess 6 years later would be all the motivation Larry Weiner would need as a young man to eventually become one of the most respected leaders in his industry. Larry partnered with Nate and later with Stanford from his return from Vietnam to set things in motion to become the largest Manufacturers Representative of Christmas decorations in the Midwest. The firm would be called, ”Nathan Weiner and Assoc.” and would birth an import company out of necessity called “Sterling Supply”, (later Sterling, Inc.) This specialty now 3rd generation business would grow to expansion levels where in its zenith it would employ well over 100 people, have impressive large corporate showrooms in places like 5Th Ave NYC, Atlanta Merchandise Mart, Dallas World Trade Center, Kansas City, Mo., Minneapolis, Minn. and would be presented in National Rep showrooms in another 15 cities across America. Nathan Weiner and Assoc. and Sterling would go on to supply small specialty companies and also accommodate large retail discount entities. The Rep side grew to 40-50 lines of product and Sterling Inc would eventually have approximately 5000 SKU’s , 2000 customers, 5 catalogs,5 Cooperate showrooms and around 15 Rep groups and a Warehouse you could play frisbee in! These customers were far and wide. Basically anyone who sold Christmas Decorations which would become most of the retail public. He got lucky!!! These companies would include the likes of Target, Costco, Sky mall, Menards, Garden Ridge, Michaels and other national store chains. Larry loved talking on his phone in the car while smoking a cigar( almost as much as a midnight scoop of peanut butter). If a call came in from (816) 591-4600 you know Larry had you in his sights!!! That cell number still sends shivers!! LOL. He always dressed for success and carried himself with a first class Esprit de Corps. Larry was also a pioneer in the growth of Southeast Asia. Larry Weiner’s name was very respected by factories in places like Taiwan, Hong Kong and Shenzhen and in the growing providence of Guangdong China. 40 years of carving relationships, touring trading companies and their factories, literally over the years by the thousands. This would round out his understanding and ability to source product, sample it, display it, sell it, ship it, bill it and even insure the customer how to sell it so that the order would increase the following year. It worked. Larry would have all 4 children work in the business and 3 would make career out of it benefiting from every small detail. The journey was grinding, long and arduous and so fruitful in so many fulfilling human ways. Larry Weiner had the quintessential golden American life. Larry had family, business, friends, community and love and in a time and a place in what could be considered so, so special. We already miss that hard charge that came so softly. Thank you Dad. Your family loves you and will miss you. In lieu of flowers, the family suggests contributions to Congregation Beth Torah, Attn: The Weiner Family Building Project, 6100 W. 127th St., Overland Park, KS 66209.

The family of Lawrence A. Weiner created this Life Tributes page to make it easy to share your memories.