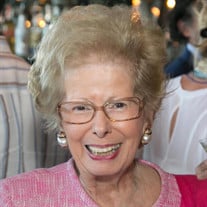 Lee Jahr Kanter passed away peacefully on Tuesday May 5, 2020, with family and friends surrounding her through the end. Lee was born on September 10, 1939, the daughter of Dr. Herman and Esther Jahr in Omaha, Nebraska. Lee graduated from Central High School and at age 17, enrolled in college at the University of Nebraska. She studied both music and elementary education. She was an accomplished pianist and she loved the arts. While attending college, Lee met and fell in love with Arnold Kanter who had just graduated from the University of Missouri-Columbia. Lee and Arnold were married August 21, 1957. In 1958, Lee or “Goose” as Arnold and Lee called each other, lived in Manheim, Germany where Arnold served in the U.S. Army’s Medical Corp. In 1959, Lee and Arnold moved to Omaha, Nebraska. While Arnold attended the University of Nebraska’s School of Medicine, Lee pursued her passion, teaching children in the Omaha School District. In 1963, Lee and Arnold moved to Kansas City, Missouri. Arnold completed his internship at St. Mary’s Hospital and together, they raised two children. Lee loved to meet people and to get actively involved with philanthropic organizations. She served as an officer in Hadassah, ORT, B’nai B’rith, and The Hyman Brand Hebrew Academy PTA. Lee loved to travel as a family all over the World. She would often say that traveling and meeting people is the best education. Throughout most of her life and even towards the end of her life, she adored the opportunity to play Bridge and Maj Jong. For 15 years, Lee taught 2nd and 3rd grade in the Kansas City Missouri School District. Besides providing the children with a unique educational experience, Lee would often spend many hours working after school, serving those in need as a helpful guide and a good friend to some of the City’s most poverty-stricken children. Lee taught at the Temple’s Sunday school for several years. She knew how important it was to share her knowledge about Jewish heritage, traditions, and values. In 1989, Lee decided that it was a time for a change in her professional life. She decided to pursue a career in residential real estate sales. As a former educator and as a person who had a genuine interest in making people happy, she became a successful real estate agent. Lee earned sales awards and the admiration from fellow agents and customers. She served as a mentor for the newer agents, and she would often become good friends with her customers and fellow agents and brokers. She treated all of her dear friends as if they were part of her family. Whether Lee was returning home from a hard day’s work at school or showing houses, Lee always managed to cook and serve family dinners at home. She believed that family bonds are important, and she inspired her kids to make the most out of their lives, to love family, and Judaism, and do what you can do to help others less fortunate. To her grandchildren, Lee was known as “Gaga”. Gaga cherished all of the moments she shared with her grandchildren. She was very proud of their accomplishments and they all blessed her with lots of nachas and love. Lee, our lady of perpetual simchas loved to plan and host parties. She looked forward to celebrating each and every joyous occasion. Friends, family, colleagues, customers were all invited; and everyone felt a spirit of togetherness. She never let anything get her down, and her humor and friendly outgoing personality were loved by so many of the people that she had touched. Lee was preceded in death by her husband of 38 years Arnold Kanter, M.D. parents Herman and Esther Jahr and her sister Betty Halpert. Survivors include her daughter, Lily (Marc) of Mill Valley, California; son, Herman (Ann) of Leawood, Kansas; and her grandchildren, Aaron, Max, Zeke, and Nate. Burial will be at the graveside plot at Rose Hill Cemetery in Kansas City, Missouri, that due to current COVID-19 the funeral services will be private with only the immediate family. In lieu of flowers, contributions to The Temple, Congregation B’nai Jehudah, Overland Park, KS will be greatly appreciated.

Lee Jahr Kanter passed away peacefully on Tuesday May 5, 2020, with family and friends surrounding her through the end. Lee was born on September 10, 1939, the daughter of Dr. Herman and Esther Jahr in Omaha, Nebraska. Lee graduated from Central... View Obituary & Service Information

The family of Lee Jahr Kanter created this Life Tributes page to make it easy to share your memories.