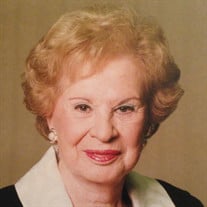 Lee Shulkind, 94, passed away peacefully at Village Shalom on July 3, 2016. She lived her long life as a passionate, dedicated and spirited volunteer in the Kansas City Community. Funeral services will be 10:00am Tuesday, July 5, 2016 at Louis Memorial Chapel, 6830 Troost Ave, Kansas City, MO. Interment will be at Rose Hill Cemetery. Kindly omit flowers, the family suggests memorial contributions to Village Shalom, Jewish Federation or a charity of the donor’s choice. Lee (Leona) was born in Staten Island on June 1, 1922. She was the daughter of loving parents, Jenny and George Katzman. She moved with her parents to Southern California in 1943. On a fortuitous blind date, Lee met 1st Lieutenant Maurice Shulkind on leave from tour of duty in the South Pacific. They married in 1945. They had three children, Lauren, Steven and Garry. This is where Lee began her volunteer life starting with Pioneer Women in Long Beach, CA, as a founding member, helping bring women and children of the Holocaust to Israel. A golden opportunity brought the Shulkinds to the Kansas City area in 1964. Lee continued her volunteer career here at Menorah Medical Center (including volunteering in the outpatient and emergency wards), Jewish Geriatric and Convalescent Center (President of the Women’s Auxiliary, as well as board member), Jewish Federation (President of the Women’s Division and many other positions) and the Hyman Brand Hebrew Academy. She was awarded many honors for her volunteer work, including Kansas City Star volunteer of the year, United Way All Star Volunteer. She also served on the boards of Jewish Community Relations Bureau and, Menorah Medical Center. She was an enthusiastic fund raiser for the many causes she believed in. She was instrumental in helping establish the Alzheimers unit at the Geriatric Center as well as being very involved in the newer Village Shalom in fundraising and design of the state of the art facility where she resided. Her involvement at the Geriatric Center was best explained by her when she said “I saw the need was so great. There was no caring in this community, at that time it was obvious, for the elderly.” She especially enjoyed making personal connections with geriatric center residents who had no family members to visit them. She made transforming the gift shop there a focus for a profitable place for residents, visitors and employees. After many years of service in Kansas City, Lee moved to Lexington, Mo, with her son Garry, to start a new chapter of her life. That included volunteering in her new town. She became active with the Whiteman Airforce Base Community Council. She was the coordinator for correspondence and gifts and they made care packages for servicemen deployed in Iraq and Afghanistan. She also joined the Lexington Garden Club and enrolled in Wentworth Military Academy, taking history classes, a long time interest. At 85 she was Wentworth’s oldest student. She was preceded in death by her husband, Maurice and son, Garry. She is survived by her children Lauren and Tony Dow, Topanga, CA and Steve and Jan Shulkind Overland Park, KS., grandchildren, Andy and Sarah Shulkind, Los Angeles, CA and Jamie Shulkind, Tel Aviv, Israel and four great-grandchildren.

Lee Shulkind, 94, passed away peacefully at Village Shalom on July 3, 2016. She lived her long life as a passionate, dedicated and spirited volunteer in the Kansas City Community. Funeral services will be 10:00am Tuesday, July 5, 2016 at Louis... View Obituary & Service Information

The family of LEE SHULKIND created this Life Tributes page to make it easy to share your memories.

Lee Shulkind, 94, passed away peacefully at Village Shalom on...