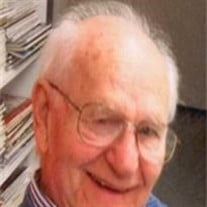 Leo Feingold, 95, of Overland Park, KS passed away peacefully in his sleep Saturday, August 28, 2010 at Menorah Medical Center. Funeral services will be 10:30am Tuesday, August 31 at the Louis Memorial Chapel. Burial Mt. Carmel Cemetery. Kindly omit flowers; The family suggests contributions to the Skipper Feingold Fund at the Jewish Community Center of Greater Kansas City, the Yiddish Fund at Village Shalom or the Hyman Brand Hebrew Academy. Born in Yonkers, NY in 1915, Leo went on to graduate from NYU in 1939. His first job out of college was with an orphanage for Jewish boys. In 1942 he enlisted in the US Army, served in the Air Corps, obtaining the rank of Captain. While training at Ft. Riley, KS he met his future wife, Ida Rose “Skipper” Luke. They would have celebrated their 65th wedding anniversary this November 18th. Leo worked in the garment industry for over 40 years and upon his retirement dedicated his life to helping and aiding others. He volunteered at the Ozman Boys Home, was a member of the Silver Haired City Council in Kansas City, MO, an ombudsman for the Jewish Geriatric Center, volunteered at Menorah Medical Center and Hyman Brand Hebrew Academy and was a longtime member of Beth Shalom Synagogue serving on its board of directors. Leo also found time for his favorite sport, tennis, and in 1998 he won the U.S. Senior Olympic Championship in San Antonio, TX. Leo is survived by his wife and life partner of 65 years Ida Rose “Skipper” Feingold; children: Anita and Chas Goldsmith, Manhasset, NY, Bari and Ed Pollyea, Columbus, OH, David Feingold and Trudi Galblum, Buzzah and Lisa Feingold, all of Prairie Village, KS and Micah Feingold and his significant other Cindy Laufer, Overland Park, KS; grandchildren, who called him “Oh Oh”, are Tara and Cory Elbaum, Marisa Goldsmith and her fiancé Micky Cavuoti, Matthew and Lauren Goldsmith, Sarah Pollyea, Dan and Jessica Pollyea, Andrea and Ilan Napchan, Erika and Javier Velasquez, Chad Feingold, Zac and Jessica Feingold, Emily Feingold, Carly Feingold and her fiancé Marc Hustvedt, Jamie and Steve Murphy, Caite and Brian Gilmore, Suzanne Galblum, Adam Galblum. The next generation coming up who were fortunate to be his great grandchildren are Nate and Eliza Elbaum, Levi Pollyea, Ada Napchan, Mia, Avi, and Marley Velasquez and Sadie Feingold. The family would like to give special thanks to Dr. Donald Cohen and the ICU staff at the Menorah Medical Center for their compassion and care. We would also like to thank his caretakers, Teresa Rodriguez and Shirley Logan for their love and devotion these past years and to the staff of Enhanced Home Care. “The heart of a lion, through life’s hectic pace Concerns of his fellows, he did embrace.”

The family of Leo Feingold created this Life Tributes page to make it easy to share your memories.