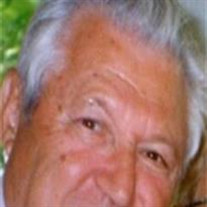 The world lost an extraordinary man when Leon Goodhart, 82, of Overland Park, Kansas, passed away on June 9, 2012. All are welcome to join the family for graveside services at 10:30am Wednesday, June 13, 2012 at Rose Hill Cemetery, 6900 Troost Avenue, Kansas City, Missouri. In lieu of flowers, the family suggests contributions to the Midwest Center for Holocaust Education, 5801 W. 115th St., Suite 106, Overland Park, KS 6621-1800. While it is impossible to sum up this incredible life story in a short obituary, we will say that Leon was born August 20, 1929 in Lodz, Poland to Chiel and Zlata Gutharc. Having survived the Holocaust only with his mother, Leon immigrated to Kansas City in 1949 to find work with his great uncle, Jake Hyman, at the Country Club Shoe Store in Brookside, where he would spend the remainder of his working life. It’s fair to say that Leon was an icon in the Brookside business community and the Greater Kansas City Metropolitan Area in general. Literally fitting generations of kids in shoes, there were many parents that wouldn’t consider having anyone else touch their children’s feet. Up until he passed away, Leon could still be found strolling the streets of Brookside, offering his time and energy to give back to the community that gave so much to him over the years. But it wasn’t all about work with Leon. He was a loving husband, father and mentor to many people around the world who have fond memories of him recounting countless stories on various topics ranging from world peace to why he insisted on cutting his small lawn with a riding lawn mower. Leon opened his heart and home to countless family and friends, including an over 30-year relationship with People to People International. As a People to People Ambassador, Leon, and his wife, Iris, mentored dozens of foreign military officers and their families who were attending the internationally-known Command and General Staff College in Leavenworth, Kansas. The relationships that were created as a result of his generosity span across the globe. Leon was also a Korean War veteran, which if you did the math, meant that he survived one war only to turn around and fight in another, although his service did, in an interesting twist of fate, serve to expedite becoming a United States citizen. He also was a life-long member of Temple B’nai Jehudah. Always wanting a better life for his children, Leon did what was necessary to make sure that the tools for success, be it guitar lessons, business opportunities or education dollars, were available to his children and grandchildren. Leon spoke several languages, some not as well as others (hint: Spanish), and loved to travel. He frequently visited family and friends in Israel, Belgium, Holland, Germany and, more recently, Poland for the first time since World War II. He also spent quite a bit of time vacationing with his immediate family in Puerto Vallarta, Mexico, where it was not uncommon to see him body-surfing at high-tide with his grandchildren. Leon is predeceased by his father and mother, and his wife, Iris, of 57 years, who recently passed away in February. He is survived by three children: Douglas Goodhart (wife, Laurence) of Countryside, Kansas, Julie Goodhart of Overland Park, Kansas, & David Goodhart (wife, Leah) of Dallas, Texas; four grandchildren: Emilie Englehard (husband, Benn), Grace Goodhart, Cash Goodhart & Lucie Goodhart; and the very many people who consider Leon part of their “extended family”. Finally, the family would like to point out that Leon was often affectionately referred to around the world as “Saba Léon,” which in the Hebrew language, translates to “Grandpa Leon”. However, while it’s true that Leon was a grandfather in every sense of the word, words cannot express the impact he had on the lives of others. So many people came to Leon for advice and counsel that the use of the word “Saba,” we believe in our hearts, was meant more as a sign of respect than its literal translation intended. A person who was truly larger than life itself, it seems that the world stopped spinning on June 9th – if just for a brief moment in time -- to mourn the passing of Saba Léon. May he finally rest in peace.

The world lost an extraordinary man when Leon Goodhart, 82, of Overland Park, Kansas, passed away on June 9, 2012. All are welcome to join the family for graveside services at 10:30am Wednesday, June 13, 2012 at Rose Hill Cemetery, 6900 Troost... View Obituary & Service Information

The family of Leon Goodhart created this Life Tributes page to make it easy to share your memories.

The world lost an extraordinary man when Leon Goodhart, 82, of...