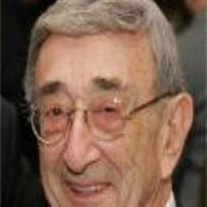 Leon Miller, 96, passed away peacefully at his home on Saturday, February 6, 2010. The funeral will be Tuesday, February 9 at 1:00 PM at the Louis Memorial Chapel, 6830 Troost, with interment at Rose Hill Cemetery. He was preceded in death by his wife, Helen and two older brothers, Hyman and Samuel Miller. He is survived by his son and daughter-in-law, Marshall and Janet Miller; two grandsons, Jonathan and Daniel Miller, and his sister, Mrs. Jeannette Frank. He is also survived by two nieces, Mrs. Ileene Simon and Mrs. Vicki Gershon and their families, and a nephew, Victor Schnider of Los Angeles and his family, as well as numerous cousins. Leon was born April 19, 1913 in Kansas City, Mo., to Isaac and Mary Davis Miller who had immigrated to the United States from England in 1904. The family lived briefly in Buffalo, N.Y., before moving to Kansas City. Leon attended Garfield and Gladstone schools and graduated in 1929 from Northeast High School. He graduated from the Dry Cleaning and Laundry Institute in Silver Springs, Md., in 1937. He met Helen Schultz, the daughter of Sam and Rebecca Schultz, in 1938 and the two eloped a year later. They had been married sixty four years when she died in 2002. Leon’s father started a tailor shop in 1904 that became Quick Service Dry Cleaning Co. in 1907 and then Miller Cleaners, which was located on St. John Avenue in the Northeast area of Kansas City, Mo. Leon was always an active supporter of the Northeast community. He took over the family business and expanded its operations to service hotels and corporate clients and continued to run the business until well into his 80s. He was known as an innovator and considered the “dean” of the dry cleaning and laundry business community. When Miller Cleaners was sold in 1997 it had been in continuous operation for 90 years and was the oldest such business in Kansas City. As a young man, Leon played the trumpet in jazz clubs and dance bands in and around Kansas City and he enjoyed sharing stories about those days. He proudly played and displayed his much-used trumpet. Leon’s other passion was the automobile and he owned more than 40 in his lifetime. When he purchased a Mini-Cooper car at age 90, he toured the factory in England and was recognized as its oldest customer. He celebrated his 92nd birthday in London and rode in a parade of classic Aston-Martin cars at Windsor Castle in the Queen’s official car. He shared his interest in vintage cars with his son and grandsons as well as their annual trips to California for the Pebble Beach Concours. Leon never met a stranger. He was warm and ongoing and genuinely enjoyed other people; he always reached out and helped those in need. For many years, Leon was a volunteer for the Meals-On-Wheels program through Good Shepherd’s Center and continued to deliver meals until he was 90 years old. He also volunteered at St. Luke’s Hospital and kept in contact with former patients that he had met there. In lieu of flowers, the family suggests contributions to the Leon Miller Memorial Fund at Good Shepherd’s Center, 5200 Oak St., Kansas City, Mo. 64112.

Leon Miller, 96, passed away peacefully at his home on Saturday, February 6, 2010. The funeral will be Tuesday, February 9 at 1:00 PM at the Louis Memorial Chapel, 6830 Troost, with interment at Rose Hill Cemetery. He was preceded in death... View Obituary & Service Information

The family of Leon Miller created this Life Tributes page to make it easy to share your memories.

Leon Miller, 96, passed away peacefully at his home on Saturday,...