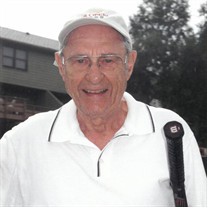 Len Horwitz of Kansas City, Missouri died August 1, 2021 after a brief and sudden illness, 6 months shy of his 100th birthday. Born in Coney Island, N.Y. February 15, 1922, the middle son of Barney and Tillie Horwitz, Len was raised in St. Albans Queens, New York. Graduating from high school 2 years early, he entered Queens College at age 16 where he graduated with a BA in 1942, and a Ph.D in clinical psychology from NYU in 1951. In 1952, he moved his young family to Topeka, Kansas to become a part of the internationally renowned Menninger Foundation. He spent the next 50 years of his long and distinguished career at Menninger, where he was a psychotherapist and psychoanalyst, serving as clinical director for several years. In the 1960’s, Dr. Horwitz was a major figure in the pioneering and acceptance of group psychotherapy at a time when individual treatment was the gold standard of care. He is nationally known for his achievement in this field and served as president of the American Group Psychotherapy Association from 1984-86, as well as president of the Topeka Psychoanalytic Society,1983-85 and chair and faculty member of the Topeka Institute for Psychoanalysis from 1975-2001. Following the closing of the Menninger Clinic in 2000, Len and June, his wife of 63 years (until her death in 2007), moved to Kansas City. There, he became a driving force in launching the Greater Kansas City Psychoanalytic Institute. For 20 years following his retirement from Menninger, he played an active role as training analyst, teacher and mentor to many as he continued supervising students from all the mental health disciplines including psychology, psychiatry social work and counseling. Len was the author of three professional books, the last of which, “Listening with the Fourth Ear”, was published in 2017, at age 95. Other works include, “Clinical Predictions in Psychotherapy”, and “Borderline Personality Disorder: Tailoring the Psychotherapy in the Patient”, which he co-authored with other colleagues. Len had only one regret as he left his full, joyful life: that he didn’t reach his 100th birthday for which he’d scheduled 3 big parties, one in Kansas City, Aspen, Colorado and New York City. Aside from his work, which was his passion, he had 3 loves: his wife June, the game of tennis, which he played avidly for 88 years, and Aspen, Colorado, where he maintained a second home for 50 years. Len Horwitz lived an active, independent and healthy life until he died. He and June were active members of The Kaufman Center for the Performing Arts, The Nelson Atkins Museum of Art and the Metropolitan Opera. An intellectual heavyweight with a memory extraordinaire, Len “set a high bar” for his family and friends. He often wondered why his children retired so young (70?!), as retirement was not in his vocabulary. Cultured and worldly, widely read and conversant in all things political, he knocked on doors for Barack Obama in 2012 and campaigned for Joe Biden in 2020. Incessantly curious, he researched and read extensively before embarking on his last international trip to Cuba at age 98. Len returned days before the COVID shutdown in March 2020. He is survived by his three children: Marjorie Murray (Ragen), Topeka, Kansas; Lynne Green, Lawrence, Kansas; Robert Horwitz, Brooklyn, NY; 3 grandchildren: Adam Green (Cori), Lawrence, Kansas; Sands Murray-Wassink of Amsterdam, The Netherlands (Robin Wassink-Murray); and Laura Murray, Rio de Janeiro, Brazil (Lourinelson Vladimir dos Santos). He had 4 great-grandchildren: Alexis Mountain, Longmont, Colorado; Jaycee Mountain, Lawrence, Kansas; Joaquim Ravi Murray dos Santos and Laura Pessoa Ambrozio dos Santos, both of Rio de Janeiro, Brazil. Memorial donations can be made to the Aspen Music Festival and School, 225 Music School Rd, Aspen Colo. 81611, The Kauffman Center for Performing Arts, 1601 Broadway, KCMO 64108 or Van Go Inc., P.O. Box 153 Lawrence, Kansas. The family wishes to thank the amazing staff at Bishop Spencer Place in Kansas City for their infinite kindness and support, as well as the staff at KU Medical Center for the excellent care they provided Len during his brief illness. A private family burial was held at Mt. Hope Cemetery in Topeka, Kansas with a Celebration of Life to be announced at a later date.

The family of Leonard Horwitz, Ph.D. created this Life Tributes page to make it easy to share your memories.