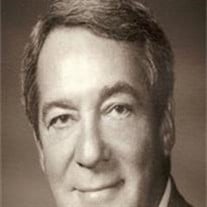 Leonard H. Strauss, 92, died June 18, 2010 at Village Shalom. Funeral services will be Monday, June 21, 2010 at 11:00 am at The Louis Memorial Chapel, 6830 Troost Ave, Kansas City, MO 64131. Burrial Rose Hill Cemetery. In lieu of flowers the family suggests contributions to a charity of choice. (Note time change from earlier posting.) Leonard was born November 12, 1917 in Kansas City. He graduated in 1934 from Paseo High School and in 1939 from Carnegie Institute of Technology (now Carnegie-Mellon University). During WWII he served as a Captain in the US Army Air Corps. At that time he wed the late Elaine Feld Stern. Together they had two daughters, Leslie and Susan. Thereafter, he was president of Thompson-Strauss Quarries and Inland Underground Facilities, pioneering the conversion of underground limestone mines into warehouse and commercial space until retirement in 1980. Post-retirement, his business interests included KFIX radio, publishing, oil production, and real estate. He was president of Menorah Hospital for 10 years. He also served as a board member of the Jewish Community Center, and Lyric Opera. He was also a former member of Oakwood Country Club, Carriage Club and belonged to The New Reform Temple. He was predeceased by his parents, Harry and Anna Strauss and his youngest brother Norman. He is survived by Una, his loving and devoted wife of 22 years, his daughters, Leslie Ann Strauss (Robert Jaurigue), and Susan Feld Strauss, grandchildren Hannah Strauss, William J. Hollibaugh, Abra R. House and his great grandson Amos Strauss. He is also survived by his brother Eugene Strauss. Enjoying his life to the fullest, Leonard treasured family, friends, travel, golf, Chief’s football, and music. He will be greatly missed by his loving family and friends.

The family of Leonard H. Strauss created this Life Tributes page to make it easy to share your memories.