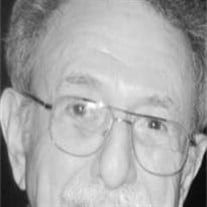 Leonard Raphael Osman, a vibrant and independent living person, after a very brief illness lost his battle with cancer on January 9, 2012. Funeral services will be at 1:00pm Tuesday, January 10, 2012 at The Louis Memorial Chapel, 6830 Troost Avenue. Burial to follow at Mt. Carmel Cemetery. Leonard was born April 12, 1923 in Chicago, IL to Semion and Elizabeth Osman. When World War II began he enlisted in the US Army and became a part of the Signal Corps stationed at Camp Crowder in Neosho, MO. During one of his weekend pass trips to Kansas City, he met the love of his life, Rosie Gutovitz, at a dance held at the old JCC on Linwood. Married April 23, 1944 they enjoyed a wonderful life together until illness took “His Rosie” on April 14, 1991. They had one son, Steven Harry Osman, with whom he shared a unique and special relationship. They were father and son but like brothers and best friends enjoying significant amounts of time together. Leonard went into the family furniture business on 33rd and Troost after the war. He later represented Douglas Dinette in the central states region becoming an award winning salesman. Working at other stores he spent the last twenty years in sales with the Jones Store in both furniture and imported carpets. He became one of the top producers in the national holding company before his retirement in 1986. His greatest enjoyment came from family and the pride in their interaction with him and his delight in their accomplishments. Weekly lunches with “Pop” were attended by as many as four generations. Bringing family together enjoying each other’s company brought him happiness. With great artistic talent he skillfully created many plans and house drawings, his passion and hobby that were enjoyed by all those who saw them. His collection of music was another passion that he enjoyed daily. Not typical for a person of his chronological maturity, was his skill in the use of computers and the internet. This allowed him to follow his interest in politics, science fiction and all causes supporting Israel. Leonard was a frequent writer to Congressmen or Letters to the Editor many of which were printed by the Kansas City Star reflecting his willingness to speak out on matters of public importance. He was a member of Kehilath Israel Synagogue and B’nai B’rith. He was preceded in death last year by his younger sister Francine Moment of Delray, FL. Pop is survived by his son Steven Osman and wife Susan, who he loved as if she were his daughter, three devoted and caring grandchildren and their wives, whom he loved: Andrew Osman and wife Deb Feder, Leawood Ks, Dan Osman and his wife Lindsey Osman of Kansas City, MO and Lauren Osman of Chicago, IL. He had three great-grandchildren Isabella Osman, Elliott Osman and Honora Osman. Pop also has two nieces, Myrna Rosenthal who lives in Olathe and Gloria Goodrich of Kansas City who adored him as “their favorite uncle”, a nephew in Delray, FL Norman Moment and his brother Stuart Moment of Urbana, IL. His great nieces were Rachel Fleming, of Olathe and Debbie Beznovsky of Overland Park and a great nephew Seth Rosenthal of Atlanta, Ga. He had six great-great nieces and nephews. Pop and his unique sense of humor will be missed by all those that knew him. Contributions may be made to the American Cancer Society, Hospice House or the American Diabetes Association.

Leonard Raphael Osman, a vibrant and independent living person, after a very brief illness lost his battle with cancer on January 9, 2012. Funeral services will be at 1:00pm Tuesday, January 10, 2012 at The Louis Memorial Chapel, 6830 Troost... View Obituary & Service Information

The family of Leonard Raphael Osman created this Life Tributes page to make it easy to share your memories.