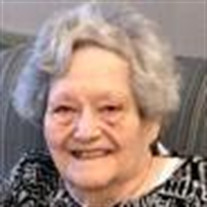 Lily Singer, 97, of Overland Park, KS passed away Sunday, November 3, 2019, at Village Shalom. Graveside services will be held at 3 p.m. on Tuesday, November 5 at Kehilath Israel Blue Ridge Cemetery. In lieu of flowers, the family kindly suggests contributions to Village Shalom and to Kansas City Hospice. Lily was born in Austin, Texas in 1922 to Minnie and Harry Rotkin. Lily and her family eventually made their way to Kansas City where she met the love of her life, Michael Singer. In addition to raising two wonderful children, Lily enjoyed working at City Hall in Kansas City, Missouri where she retired after 23 years. Lily then worked as a greeter at Walmart where she liked seeing old friends and meeting new ones. Lily loved to knit and to crochet. She always carried her knitting and crochet supplies in a big, blue bag and she eventually knitted over 2,000 hats for the Salvation Army and for Mutual Help. Lily had a dry sense of humor and a quick wit well into her 90s. When recently asked by her doctor to name the current president, she replied, “Why are you asking me? Don’t you know?” Lily was preceded in death by her husband, Michael, of 66 years, and her brother, Aaron, who passed away as a child. Lily is survived by her daughter: Ann Rochelle Tannenbaum, Overland Park, Kansas; son and daughter-in-law: Jerry and Margaret Singer, Kansas City, MO; brothers and sisters-in-law: Morton and Helene Singer, Overland Park, KS; Neal and Elaine Singer, Leawood, KS; grandchildren and their spouses: Erica and David Bush, Leawood, KS; Jana and Kenny Mann, Chicago, IL; Debby and David Bell, Leawood, KS; Brian and his fiancé Jessica Stichler, Lee’s Summit, MO; great-grandchildren: Jonathan Bush, Chapel Hill, NC; Rebecca Bush, Lawrence, KS; Michael Bell, Leawood, KS.

The family of Lily Singer created this Life Tributes page to make it easy to share your memories.