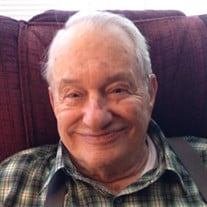 Lionel H. Greenberg, 92, of Overland Park, KS, died October 2, 2017 at Menorah Medical Center. Funeral services were held at 10:00am Wednesday, October 4, 2017 at The Louis Memorial Chapel with burial following at Mt. Carmel Cemetery. In lieu of flowers, the family suggests contributions to Village Shalom. He was born January 3, 1925 in Kansas City, MO, the son of Gertrude and Samuel L. Greenberg. He received his Bachelor of Science Degree from the University of Missouri. Lionel was employed by The Leader Clothing Co. where he became President and Stevens Envelope Co. where he was also President. He was a past president of the K.C., KS YMCA, the Minnesota Area Merchants Association and of the Wyandotte County Chamber of Commerce. Lionel was a board member of the United Way and Donnelly College. He was a lifetime board member of Congregation Beth Shalom, was a naval officer in World War II and a lifetime member of the Oakwood Bogie Bums. Lionel was preceded in death by his son, Jeffrey Greenberg; his wife Kay Greenberg, his wife Sue Greenberg, his wife Joan Greenberg and his sister, Arlene Jacobs. He will be deeply missed by his son and daughter-in-law: Bartley and Karen Greenberg of Huntington Beach, CA; his daughter: Rhonda Greenberg of Scottsdale, AZ and his daughter and son-in-law: Sharon and Fletcher Faircloth of Chattanooga, TN; also his grandchildren: Carrie Bloomston, Kris Keul, Adam and Amber Bloomston, Sam Greenberg and Jessica Faircloth; his step-children: Harriet and Larry Almaleh, Shelly and Stu Hirsh, Michael and Andrea Puritz, Keith and Reba Puritz, Steve and Carol Burstein, John Burstein, Carol and George Halper, Nan and John Oscherwitz; his 13 grandchildren and 4 great-grandchildren. Lionel leaves a legacy of strong family ties, profound love and friendship.

The family of LIONEL H. GREENBERG created this Life Tributes page to make it easy to share your memories.