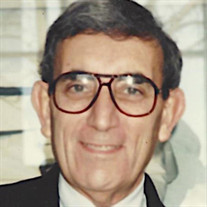 If you believe in the dictum “Most fun wins,” Lloyd S. Hellman was a winner in the game of life. Tall, dark and handsome, he was a tennis player, sports-car driver, skier, hiker, camper, boater, Beachmaster, Grillmaster, Song Leader and more. He popularized the phrase “I’ll have both” long before it became a meme. The lifelong Kansas Citian, age 91, died Tuesday, March 22, at Menorah Medical Center. Funeral services (masks required) will be at 11 a.m. Friday, March 25, at Congregation Beth Torah, 6100 W. 127th St., with private interment to follow at Rose Hill Cemetery. Lloyd was born June 11, 1930, to Morton and Bertha Hellman. He had an older brother, Benjamin (Shirley). Lloyd was an Eagle Scout and one of the first Boy Scouts from Kansas City given the honor of camping at the Philmont Scout Ranch in New Mexico. The Chief himself, H. Roe Bartle, presented Lloyd his Brave claw and inducted him into the Scout honor society, the Tribe of Mic-O-Say, at Osceola, Mo. Later, he served as a Scout leader and merit badge counselor. He graduated from Paseo High School, Kansas City Junior College, the University of Missouri-Columbia and the University of Missouri-Kansas City School of Law. He was a member of Phi Sigma Delta fraternity at MU. He was a partner in the law firm Sandler, Balkin, Hellman & Weinstein. He was drafted into the U.S. Marines during the Korean Conflict, serving as a radar station operator in South Korea and earning the rank of Captain. He was a member of the Jewish War Veterans Mo-Kan Post #605. Lloyd was a vice president of the Jewish Community Center of Greater Kansas City and served on its board of governors. He was a member of Congregation Beth Torah. Lloyd worked and played hard. He drove Jaguars and Camaros. He dug Little Richard at the Orchid Room, Monti Rock III at New York’s Cheetah club and the Rolling Stones at Wembley Stadium. His Letters to the Editor of the KC Star, like all his actions, evinced his liberal, humanistic values. He is survived by his wife of 66 Years, Judith D. Hellman (nee Eisberg) of Overland Park, and their children, Rick Hellman and Anne Hellman, daughter-in-law Teresa Hellman (Rick) and grandchildren Sarah Hellman and Margo Hellman. Memorial contributions may be made to the JCC of Greater Kansas City, the Military Religious Freedom Foundation, or a charity of your choice.

If you believe in the dictum &#8220;Most fun wins,&#8221; Lloyd S. Hellman was a winner in the game of life. Tall, dark and handsome, he was a tennis player, sports-car driver, skier, hiker, camper, boater, Beachmaster, Grillmaster, Song Leader... View Obituary & Service Information

The family of Lloyd S. Hellman created this Life Tributes page to make it easy to share your memories.

If you believe in the dictum “Most fun wins,” Lloyd S. Hellman...