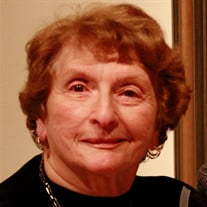 The Abt and Royer families mourn the passing of Lottie Weinman Abt on April 23, 2019. She was born in Bielefeld, Germany in 1921 and lived there until immigrating to the United States in 1934. Her birth father died when she was five and her stepfather, wisely anticipating the Nazi danger for Jews, brought her to Chicago to look into opportunities there. He left her with an aunt and uncle, returned to Germany to close the family business, and brought Lottie’s mother and younger brother Herbie a year later. Lottie was held back in school because she was not yet fluent in English, but quickly mastered it, being promoted several school levels, and translating for her parents when they arrived. She learned bookkeeping and was working in Chicago when she met Arthur Abt in early 1946, marrying him the following October. Despite her love of Chicago, Lottie agreed in 1949 to move to Kansas City—where Arthur had many relatives—to have their children. She welcomed the family support and life among “The Crowd,” a circle of young mostly German-Jewish immigrants who celebrated holidays and special occasions with each other, partied together, vacationed together, and grew into family by choice. Lottie hosted many parties over years and she composed numerous poems to mark the milestones of family and friends. After her children reached young adulthood she returned to bookkeeping, working several years for the Jewish Vocational Service. After 71 years of marriage, in 2017, Lottie lost Arthur. But she is survived by her brother Herb Weinman in Providence, Rhode Island, children Jeffrey (and wife Mary) and Helen (and husband Mark Royer), five grandchildren, three great-grandchildren, and numerous nieces and nephews. Her recollections of family and friends, and the stories that bound them together, her enjoyment of jokes, and particularly her enthusiasm for festivities of all kinds will be missed by everyone who knew her. There will be a gathering to celebrate Lottie’s life from 2:00 to 4:00 p.m., Sunday, May 19th, 2019 in the Village Shalom social hall at 5500 West 123rd Street, Overland Park, Kansas, 66209. All are welcomed to join the family there. Gifts honoring her memory can be made to The Temple, B’nai Jehudah, Evergreen Hospice Care, or the charity of your choice.

The Abt and Royer families mourn the passing of Lottie Weinman Abt on April 23, 2019. She was born in Bielefeld, Germany in 1921 and lived there until immigrating to the United States in 1934. Her birth father died when she was five and her... View Obituary & Service Information

The family of Lottie W. Abt created this Life Tributes page to make it easy to share your memories.

The Abt and Royer families mourn the passing of Lottie Weinman...