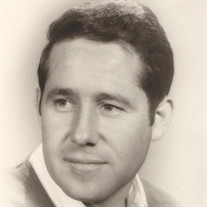 Louis Ashner, 81, of Mission, KS, the son of Bessie Penner and Charles (Charlie) Ashner, Jewish immigrants from Poland and Russia, was born and grew up with his seven brothers and sisters on a dairy farm in Johnson County, Kansas, the site of which he would call his home for life. He graduated from Shawnee Mission Rural High School and attended the University of Missouri – Kansas City. He served his country in the U.S. Army, stationed in Germany. Working alongside his wife, Sonie, he established one of the most successful agencies in the history of the American Family Insurance Company. He was an avid student of history and politics and traveled extensively in retirement. A favorite destination was anything Disney and he was a frequent cruise line passenger on many ocean and river itineraries. He never threw out a National Geographic magazine. He adored Johnny Carson, physical fitness, yard work, a good deal and Fox News. He was a lover of animals and shared his life with some of the luckiest rescue cats. He was preceded in death by his parents and sisters: Fern Ruth “Eva” Ashner and Anna Mae Rice. Lou is survived by his wife of 53 years, Sandra “Sonie” Ashner; son: Stuart Ashner, Oak Park, IL; daughter and son-in-law: Lisa Ashner Adkins and husband David, Lexington, KY; brothers and sisters-in-law: Leo and Dottye Ashner, Leawood, KS; Barney and Marlene Ashner and Herb Ashner, all of Overland Park, KS; sisters: Dorothy Parness, Overland Park, KS ad Frances Feldman, N. Plainfield, NJ; granddaughters: Nell Adkins; Jane Wilkie-Ashner and Anne Wilkie-Ashner. He adored his granddaughters who knew him as Poppy and Poppa Lou. Lou passed away Tuesday, July 28, 2015. Services will be Thursday morning, July 30, 2015 at 10:30am, at The Louis Memorial Chapel, 6830 Troost Avenue, with burial to follow at Rose Hill Cemetery. In lieu of flowers, the family suggests contributions to Wayside Waifs, University of Kansas Medical Center or a charity of one’s choice.

Louis Ashner, 81, of Mission, KS, the son of Bessie Penner and Charles (Charlie) Ashner, Jewish immigrants from Poland and Russia, was born and grew up with his seven brothers and sisters on a dairy farm in Johnson County, Kansas, the site of... View Obituary & Service Information

The family of LOUIS ASHNER created this Life Tributes page to make it easy to share your memories.