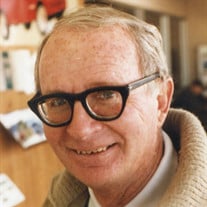 Louis Greenbaum passed away on July 7, 2018, at the age of 95. Funeral services will be at 1:00pm Wednesday, July 11, 2018 at The Louis Memorial Chapel, 6830 Troost Avenue, Kansas City, MO with burial to follow at Rose Hill Cemetery. In lieu of flowers, contributions may be given to a charity of one’s choice. He was born in Blendov, Poland, in 1922, to his beloved parents, Fanney and Fischel Greenbaum. He leaves behind his family, who adored him: His wife of 70 years, Anne F. Greenbaum; his sons, Frederick J. Greenbaum and wife Tina, Lawrence D. Greenbaum; his daughter, Susan G. Greenbaum and husband Chris Parker; his daughter-in-law, Laura Greenbaum; his grandchildren, Phil Greenbaum, Patti Greenbaum and husband Jordan Jurcyk, Jack Greenbaum, Katie Weiner and husband Joe, Joe Greenbaum, Aaron Greenbaum, and Gabe Greenbaum; and great-granddaughter, Eloise “Lulu” Greenbaum. He was preceded in death by his parents; his son, Ronald S. Greenbaum; and his siblings, Sarah McDonald, Ben Greenbaum, and Miriam Greenbaum. Louis made the most of every day of his 95 years, bringing his positive attitude to everything he did, at work and play. In 1929, he, his mother, and his siblings rejoined papa Fischel, who had just become a United States citizen after arriving in Kansas City in 1924. Lou’s parents were his heroes, working hard to provide for their family and to send money to help family that remained in Poland. Louie graduated from Northeast High School and served in the U.S. Army in WWII. After the war, he attended and graduated from the University of Missouri, where he met Anne Fox, who became his wife of 70 years. Their wonderful and animated life together was centered on their four children, whom they loved unconditionally. Lou and Anne shared a strong work ethic that their children inherited. He worked in various capacities at car dealerships and was also an independent car dealer. Whether through his work or in his many athletic pursuits, he made friends everywhere he went. Over his long life, Louie enjoyed playing golf, baseball, handball, racquetball, and basketball. He was a very talented athlete who never allowed his small stature to be an obstacle. He was proud of his basketball prowess in his youth, and he also had the remarkable distinction of hitting two holes-in-one within eight months of each other. But his greatest passion in life was his family. Lou was a trusted confidant and intelligent, generous advisor, a sympathetic ear, an always encouraging supporter, a wonderful storyteller with a joyful laugh, and a role model to his children of ethical behavior and loyalty—because that was the only way he knew how to be. “Do the best you can” was his enduring mantra, as both encouragement and comfort. He appreciated all the people who helped him throughout his life, and he loved helping others. He knew that he lived a charmed life in many ways, and he was thankful every day for the countless joys he shared with his family and friends—knowing he was very loved and also very liked. Positive, engaged, and engaging to the very end, Louis left us with countless wonderful memories— countless stories, life lessons, and counsel to guide and entertain us. He will live on as we retell those stories, and we will miss him every day.

Louis Greenbaum passed away on July 7, 2018, at the age of 95. Funeral services will be at 1:00pm Wednesday, July 11, 2018 at The Louis Memorial Chapel, 6830 Troost Avenue, Kansas City, MO with burial to follow at Rose Hill Cemetery. In lieu... View Obituary & Service Information

The family of LOUIS GREENBAUM created this Life Tributes page to make it easy to share your memories.