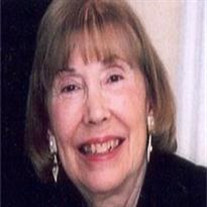 Louise Stam Garfinkle, of Overland Park, KS, died April 28, 2010. Funeral services will be at 9:00am Friday, April 30, at The Temple, Congregation B’nai Jehudah, 12320 Nall Ave., Overland Park, KS 66209. In lieu of flowers, please make contributions to The Temple, Congregation B’nai Jehudah; The Myron and Louise Stam Garfinkle Fund for heart patients at St. Luke’s Hospital, The American Cancer Society or the Kansas City Hospice House, 12000 Wornall Rd., Kansas City, MO 64145. Louise was born in Lincoln, Nebraska on June 13, 1930 to parents William and Minnie Stam. She graduated from Lincoln High School, attended the University of Colorado at Boulder and was graduated from the University of Nebraska at Lincoln. She was a member of Sigma Delta Tau Sorority. She married Myron “Mike” Garfinkle in 1955 and they moved to Kansas City from Leavenworth, Kansas a year later. They raised two wonderful children and spent many happy week-ends at the Lake of the Ozarks with their boat. Mike passed away in 2000. Louise was a very active volunteer in the Jewish community. She was president of the Board of Trustees of The Temple, Congregation B’nai Jehudah. She was also president of its Sisterhood. Louise was a member of the Board of Trustees of the Union of Reform Judaism, of the Women of Reform Judaism and of the Jewish Braille Institute of America. She was a Life Member and on the Board of Trustees of the National Council of Jewish Women and Hadassah. She was also a Life Member of Brandeis University Women’s Group and the former Menorah Auxiliary. Louise was a patron of the Nelson-Atkins Museum of Art and a member of the Nerman Gallery. She was an avid collector of Belleek Parian china and a member of the Belleek Society. She loved to travel and made many trips to Europe and also visited China, Australia and New Zealand. Louise is survived by her loving family and companion, Gerald Zobel, of the home; son and daughter-in-law: Jack and Cindy Garfinkle, of Overland Park, KS; daughter and son-in-law: Dr. Jill and Andy Sandler, of Mission, KS; grandsons: Jeffrey and Noah Garfinkle. She is also survived by her sister and brother-in-law: Roberta and Sig Safier; niece and nephew: Ellen Safier and Richard Safier, all of Houston, TX.

The family of Louise Stam Garfinkle created this Life Tributes page to make it easy to share your memories.