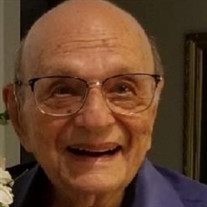 Manuel S. Nowick, 100, passed away Saturday, July 18, 2020 in Louisville, NE. Private family services will be held on Monday, July 20, 2020 at Mt. Carmel Cemetery. In lieu of flowers, the family suggests contributi9ons to the Lofte Community Theater, 15841 Manley Road, Manley, NE 68403 or to a charity of one’s choice. Born to George Nowick and Esther Sedalnick Nowick June 4, 1920, in Kansas City, Missouri, the youngest of three children, brother Willie and sister Elaine being older. His Dad owned a pawn shop at 18th and Vine and when Manuel was still in grade school he met Count Basie, famous jazz musician who used to trade there and would leave his fancy suit to be cleaned and send Manuel in a taxi to pick it up for him every week while in KC. At his Dad’s second pawn shop on 27th and Prospect, in the 40’s he met Satchel Paige, famous pitcher for the Monarchs, an all black baseball team, in KC, and also played with other major league teams all over the country, but every time he came home he would contact Manuel to take him to Gate’s for BBQ. Also at that same pawn shop he met Bubbles Klice, a Golden Gloves coach. While at a national G.G. tournament in KC, Bubbles spotted Manuel and took him up to ringside to watch the fights. Some 20 years later he was still there as timekeeper and also served as Vice President for a short time. Manuel loved volunteering and was also instrumental in introducing padded head gear worn for boxers. He was very interested in acting, so while only 8 or 9 years of age, on Sundays, his mother would take him to read religious readings at “WOK” radio for Unity on 9th St. Then on “WDAF” he took parts for children such as “Danny Dodge” on symphony programs to influence kids to listen to symphonies and buy Dodge cars. As a freshman in high school he was featured at “KMBC” in “The Tom Mix Show” which starred “The Sons of the Pioneers,” a famous group of musicians. Then one summer he was the son of a farmer in “The Randall Family” in Omaha, which was recorded in Chicago and went out to all states and Australia. But his most loved and famous role while still in high school was “Scrappy,” a juvenile lead in a show called “Uncle Bob & Scrappy,” for Holsum Bread Company, which was owned by the Mayor of KC, Brice B. smith. He was chosen over 20 boys to play the part by Dr. Harry Strandhagen, Uncle Bob, which turned into a lifelong friendship. It was renewed seven times and ran two years, and took the bread company from being in the red to #1 in KC. He took the lead in his high school plays and also in college, where he enrolled in pre-law at Northwestern, in Evanston, Illinois. He acted and directed in many plays there and was president of the National Service Fraternity, Alpha Phi Omega. He graduated with a BA in 1941, but decided to enlist in the Navy before continuing his education. He received orders to report to Chicago, close to where he was attending law school to become a naval ensign, called a “90 day wonder.” In 1943 after graduating from midshipman training, he was ordered to go to San Diego to train to lead a fleet of LCVP’s (Landing Craft Vehicle Personnel) boats for the invasion of Guam in the Marianna Islands. His duties also included being in charge of constructing living quarters, but even though he just had one year of law, he was also to provide all legal duties necessary. After completing his service in 1946 he returned to finish law school and in several years he was practicing law with the Koenigsdorf office in KC, most of his partners being from the same Boy Scout Troop as he. Besides acting his other two hobbies were playing duplicate bridge and dancing. He attained the honor of receiving a Gold Life Master award in bridge and it was in dancing that he met his wife, Barbara, and they were married August 31, 1996, at a family reunion near Ashland, Nebraska. Manuel had been married briefly before, and never had any children, but upon marrying Barbara he received six step children, 14 grandchildren and as of July 2020 – 21 great grandchildren. As a couple they traveled to Europe several times and to visit the children all over the states, and it also didn’t hurt that one of those step children worked for American Airlines. He was preceded in death by his parents, his brother, William Nowick, his sister Elaine Nowick Lewin and his nephew, Mickey Lewin. Those left to mourn are his wife, Barbara, his step children; Richard (Glenda) Laune, Jeanne Laune, Kay (Carlos) Henry, Jim (Annette) Loofe, Bill (Kim) Loofe and Dee (Pedro) Arias. Nieces: Marcia Berlau, Jackie Kamin and Stevie Pessin. Great nieces: Neily Schoegler, Jodi Kaplan and Nancy Batdorf. Great nephews: John Berlau, Joel Lewin and Gregory Pessin. Plus all the sweet grands and greats he acquired.

The family of Manuel S. Nowick created this Life Tributes page to make it easy to share your memories.