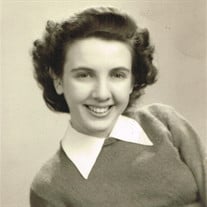 Marcia Anne (Rubin) Friedman, 93, of Overland Park, KS died on March 19, 2019 at Menorah Medical Center. Services will be at 2:00pm Friday, March 22, 2019 at the Sheffield Cemetery Chapel. She was born on October 5, 1925, the second child of William Rubin and Edith (Kasoi) Rubin. She graduated from Paseo High School, class of 1942. In 1946, she married Charles Saver, and their union produced two children before Charles passed away in 1952. Three years later, Marcia wed Nathan Friedman and together they bore a son and a daughter. Nate died in 1996. While her children were young, Marcia was a devoted homemaker, an avid reader to her kids, and a seamstress particularly adept at sundresses and other articles of clothing. For many years, she was the official scorekeeper for youth league baseball games at the Jewish Community Center. Once her children were grown, she took a job as a receptionist in the office of her uncle, Wolfe Cohen, a local dentist. For her whole life, Marcia ardently took care of relatives of all ages who needed her support. She was also a member of Congregation Beth Shalom and the Hadassah Sisterhood. Marcia was extremely close to her elder sister, Natalie (Rubin) Sickel, wife of Marc Sickel, and the two spoke on the phone nearly every day until Natalie died in 2006. Marcia remained close with Natalie’s son Warren Sickel and his wife Diane, as well as their sons Jason and Aaron and their families, until the end of her life. No one who knew her would describe Marcia as a world traveler. A life-long resident of Kansas City, she only left the area on a handful of occasions: her first honeymoon, her eldest son’s wedding in St. Louis, and a train trip to Marceline, MO, the hometown of Walt Disney, who was given his first job as a graphic artist by Marcia’s father William. Within the Kansas City area, Marcia was willing to drive to many locations, as long as the journey did not involve travelling on a highway or making a left turn. After more than 50 years living on 79th Street in South Kansas City, Marcia, also known as “Bubby,” became a resident at Brookdale Overland Park, where she indulged her passion for crosswords, jigsaw puzzles, and Scrabble. She was also fond of watching Jeopardy, tennis matches, and the Kansas City Royals on television, although it is said that she refused to wear her favorite Royals t-shirt if the team had lost the previous day. Marcia was filled with joy when her first cousin Herb Cohen returned to Kansas City a few years ago after spending most of his adult life in Springfield, MO. During their weekly Sunday lunches at Brookdale, they would revel in discussing memories of their school days, their extended family, and the old haunts they frequented together as teenagers. Marcia’s daughters and her nephew joined them for these Sunday lunches, and the other residents often commented on how boisterous the table was, although they admitted it was good to hear so much laughter. Late in life, Marcia gained notoriety among connoisseurs of children’s literature as the unlikely hero of two picture books, The Legend of Bubby the Kid and Me and My Bubby McGee, written by her younger son. She often asked when the third book in the series, B-B-B-Bubby and the Jets, would finally appear. She is survived by her son, Howard Saver and his wife Robin Russell, of Makanda, IL; her daughter, Linda Saver, of Overland Park, KS, her son Michael Friedman and his wife Cheryl, of Scranton, PA; her daughter Edith Keller and her husband George, of Hillsdale, KS; as well as many grandchildren, step-grandchildren, and great-grandchildren. In lieu of flowers, at Marcia’s request, please send donations to the American Heart Association.

The family of Marcia A. Friedman created this Life Tributes page to make it easy to share your memories.