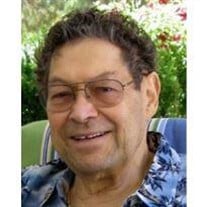 Marcus Levitch, 80, Overland Park, Kansas, passed away December 6, 2013, at The Kansas City Hospice House. Funeral services were held Tuesday, December 10th, at the Louis Memorial Chapel, with burial at Mount Carmel Cemetery. Kindly omit flowers; the family suggests contributions to Kehilath Israel Synagogue or The Kansas City Hospice House. Marcus was born on April 30, 1933 to Pete & Rose Levitch, where he was the youngest of four siblings. He graduated from Central High School and then continued his education studying the electrical trade. Marcus served as a medic in the US Army. Marcus became a master electrician and a co-owned Re-Nu-A-Lite, an electrical contracting business, with his brother for many years. In his younger years, Marcus participated in various athletic competitions, as a wrestler, weight lifter, racquetball player, and bowler. Playing poker was also one of his passions. Marcus was married for 53 years to Lois, the love of his life, and blessed with two children. He loved traveling the world with his wife and spending quality time with family and friends. He was known for his unique humor delivery and for the various ways he made people laugh. He served his community in a various roles, such as President of the Greater Kansas City Joint B’nai B’rith Council, Patient Volunteer at Menorah Medical Center’s Cardiac Rehab Unit, and volunteer in disasters for the American Red Cross. He had a very strong connection to his faith and was a “regular” for Saturday morning services. He sang for decades in the Kehilath Israel Men’s Choir, spending countless hours perfecting harmonies and delivering spiritually moving performances. He also was an active member in the ROMEOS in his later years. He was preceded in death by his wife and parents, his brother, Morris Levitch and two sisters, Sara Kramsky and Gertrude Kaplan. He leaves a daughter, Wendy Passer, her husband Mike and their daughters, Rachel and Hannah of Bloomfield Hills, Michigan, and a son Robert Levitch, and his wife Lenna and their daughters, Demi and Mya of Overland Park, Kansas. Marcus also leaves many nephews, nieces, cousins, and numerous friends. He will be greatly missed.

The family of Marcus Levitch created this Life Tributes page to make it easy to share your memories.