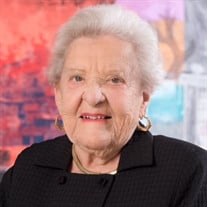 Margaret Ann Nerman 95, passed away March 21, 2018 at her home. Funeral services will be 1:30pm Friday, March 23, 2018 at the Yukon Chapel at Mt. Carmel Cemetery, 5529 Ditzler, Raytown, MO. Interment will be in Mt. Carmel Cemetery. Margaret Ann Nerman was born on October 15, 1922 in Kansas City to Louis and Rebecca Rubin. She was preceded in death by her parents; her sisters, Alice Schik and Betty Caplan; her brother, Oscar Rubin and her husband of 75 years, Jerry. She is survived by her son, Lewis (Sue); her grandson, Gregory (Ashley) and her great granddaughter, Penelope. Margaret went to William Rockhill Nelson Elementary School at 53rd and Holmes. It is now a part of the University of Missouri-Kansas City. Margaret graduated from Southwest High School. Margaret met Jerome Nerman in 1940 at Zeff's Department store. They were married at Beth Shalom Synagogue by Rabbi Haddas on August 8, 1941. She worked at the Children's Store in Prairie Village when Lewis was in school and at Fabrics for Fashion in Corinth. Margaret had a strong work ethic and loved interacting with people. She worked at Williams Sonoma for ten years and was employee of the year when she was in her 80’s. Margaret and Jerry loved to travel and went to every corner of the world with their best friends, Lucille and Dominic Tutera. Margaret served on many civic boards and was dedicated to the arts and especially the Kansas City Art Institute. She was an advocate for the students at KCAI and believed they should have a place on campus to get something to eat without leaving the school. She funded Cafe Nerman which opened in November 2003 adjacent to Vanderslice Hall. Jerry and Margaret’s dedication to the arts extended to Kansas with the opening of the Nerman Museum of Contemporary Art at Johnson County Community College in 2007. The museum was a source of great pride for them and they enjoyed discovering new and innovative artists at the Nerman. Here are a few of her accomplishments: 2003 Donated the Siah Armajani Gazebo at Village Shalom 2005 Leawood Advocate for the Arts Award for philanthropy in support of the arts. 2005 Kathleen Sibelius awarded them The Governor Art Award 2006 Honorary Chairs of the KCAI Masquerade Ball 2006 Art and Antiques magazine named them one of the Top 100 Collectors in America. 2007 Nerman Museum of Contemporary Art opened at Johnson County Community College. 2007 The Nerman Gallery opened in the Bloch wing at the Nelson-Atkins Museum 2008 Jerry and Margaret received Honorary Doctorates from the Kansas City Art Institute Funded the Truman Library Decision Room Science City memorial in honor of Dominic Tutera 2015 Endowed the Office of the President at Kansas City Art Institute 2016 Honorary Chairs of Arts KC Breakfast 2016 Jewish Community Center Lifetime Membership Award The family thanks Dr. John Dunlap for his excellent care and our caregivers, Camille Johnson, Asma Jouhari, Aster Tezera, Ruth Tezera, Kimberly Vincent, and Alisha Whitley. Special thanks to Asana Hospice for their compassion and guidance. The family requests no flowers or food. Donations may be made to the Nerman Museum of Contemporary Art 12345 College Blvd, Overland Park, Kansas 66210 or the Nerman Family Presidents Fund at Kansas City Art Institute 4415 Warwick Blvd, Kansas City, MO 64111.

The family of MARGARET ANN RUBIN NERMAN created this Life Tributes page to make it easy to share your memories.