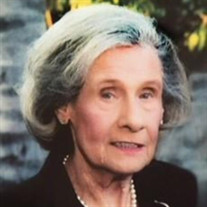 Margaret Routman Schoenfeld (Marge), 94, of Mission Hills, KS died peacefully on Monday, January 3rd surrounded by her loving family. A graveside service will be held on Tuesday, January 4th at 4:00 pm at Rose Hill Cemetery, 6900 Troost, Kansas City, MO. A Zoom link will be available by emailing [email protected] In lieu of flowers please consider a donation to Children’s Mercy Hospital or a charity of one’s choice. Marge was born in St. Louis, MO on April 11, 1927 to Abe and Bessie Stern Routman. At the age of three her family relocated to Springfield, Illinois. She attended the University of Illinois for one year and then left for the University of Missouri when her cousins assured her she might find a husband there. As it happened, there, she met the love of her life, Fred Schoenfeld. She and Fred enjoyed a beautiful marriage for 59 years until his death in 2008. A few words come to mind when describing Marge: dedicated, loyal, devoted, astute, intelligent, independent, compassionate, witty and a wonderful soul. Marge and Fred built a life together in Kansas City with family and many lifelong friends. They traveled the world, spent winters in Scottsdale but always called Kansas City home. Here they raised a family where Marge was the center of a warm and loving home. She was happy fulfilling her lifelong dream to be a wife and homemaker, and excelled at both. Their home was always the gathering place for her children’s friends, many of whom remained close to her throughout her life. Marge treasured the many special relationships she developed through her community involvement. She volunteered at Hadassah Thrift Shop, Shalom Geriatric and Convalescent Center Gift Shop, was an active member of the Reinhardt Garden Club and enjoyed a weekly bowling league and mahjong games with friends. Marge was preceded in death by her husband, Fred Schoenfeld in 2008, her son, Stephen Schoenfeld in 1989 and her brother Jerome Routman in 2004. She leaves a son, Tom Schoenfeld (Kay) of Mission Hills, KS, daughter, Susan Fate (Michael) of Mission Hills, KS and daughter-in-law Marcia Schoenfeld (Fred Greenstein) of Prairie Village, KS, as well as a brother, Melvin Routman. In addition she leaves 7 grandchildren and 14 great-grandchildren. Her grandchildren are Stacy Schoenfeld Curtis (Ryan), Brett Schoenfeld (Christy), Melissa Fate Sansale (Casey), Amy Bell (Michael), Brian Fate, Scott Schoenfeld (Maggie) and Sally Schoenfeld. Her great-grandchildren include Wylie and Tommy Curtis, Stephen, Kate, James and Andrew Schoenfeld, Sloane, Emerson and Graham Sansale, Tommy, Caroline, Molly Bell, Teddy and Wells Schoenfeld. The family would like to express our warmest thanks and deep appreciation to her devoted caregivers over the past few years Nikki, Sondra and Nelda, as well as the kind and compassionate staff of Kindred Hospice. A Celebration of Life will take place on Friday, January 14 from 4:00 pm to 6:00 pm at Mission Hills Country Club, 5400 Mission Drive, Mission Hills, KS.

The family of Margaret Routman Schoenfeld created this Life Tributes page to make it easy to share your memories.