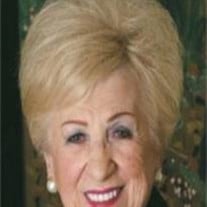 Maria Devinki, of Leawood, Kansas, passed away Monday December 12, 2011, at Menorah Medical Center, surrounded by her loving family. Funeral services will be at 2:00pm Wednesday, December 14 at The Louis Memorial Chapel, 6830 Troost Avenue. Burial will be at Kehilath Israel Blue Ridge Cemetery. In lieu of flowers, the family suggests contributions be made to the Maria and Fred Devinki Torah Preservation Fund, the Maria and Fred Devinki Flower Fund, both at Kehilath Israel Synagoguue, or the Hyman Brand Hebrew Academy. Maria was born in Hanover, Germany, in 1920. She grew up in Wodislaw, Poland, where she studied at the Bais Yaakov Hebrew school. The math wiz of her class, Maria spent many hours helping her girlfriends with their homework, something she was always proud of. In 1942, three years after the onset of the Holocaust, which changed the path of the life she knew, she married her beloved husband of 50 years, Fred Devinki, of blessed memory. Maria lost her father, both of her brothers and over a hundred relatives in the Holocaust. She survived with her husband and her mother for 27 months in a bunker under a barn. Immediately after the war, Maria and Fred started a grocery store in Sosnowiec, Poland, before moving to Regensburg, Germany, where they founded a textile business. In 1950, the family immigrated to the United States. Despite not knowing the language, customs or anyone in the community, Maria and Fred made a new home in Kansas City, where the local Jewish community sponsored and embraced these new immigrants. Maria was truly a brilliant and unique woman. Her strong business sense, elegant style and passion for building a new life for her family gave her the strength, together with her husband Fred, to start another new business in 1955. With her high heels and high hopes, Maria and Fred founded Devinki Real Estate. With the success of their business, Maria was able to do what she loved most, helping others. Maria’s strong faith taught her to share her successes with as many people as possible. Every organization and friend who turned to her knew they could count on her wisdom, her financial support, and her tireless dedication. She supported the Hyman Brand Hebrew Academy from its beginnings. The Academy honored Maria this past April with the Civic Service Award on their 45th anniversary. One of Maria’s proudest moments came in 1992, when she and her beloved husband, Fred, dedicated a Torah scroll to Kehilath Israel Synagogue, in honor of their 50th wedding anniversary. K.I. remained one of the most important institutions for Maria’s family. She served for many years on the synagogue’s board and Sisterhood. For her dedication, Kehilath Israel Synagogue presented her with their Woman of Valor award. Maria also helped found the Midwest Center for Holocaust Education in 1993, and served as a vice president and director emeritus there. Hadassah presented her with the Woman of Valor Award; Israel Bonds presented her with their Award of Honor, Jewish Family Services presented her with the Alfred Benjamin award, and nationally, the United Jewish Communities gave her the Kipnis Wilson Award, for philanthropy and leadership in the Jewish Community. Her commitment and service to her Jewish community was extremely meaningful to her. She was one of the first women to endow her Lion Judah gifts through the Jewish Federation of Greater Kansas City to help continue the important work that they do; she was the chair of Israel Bonds in Kansas City for several years; she was also very supportive of the Chabad House in Kansas City, and founding donor of the United States Holocaust Memorial Museum. Through the years, when leaders from Israel came to Kansas City, Maria was there to greet them. Her walls are covered with photos of her meetings with the late Prime Minister Yitzhak Rabin, Elie Wiesel, former Prime Minister Ehud Olmert, and many others. No rabbi came to Kansas City without the opportunity to sit with Maria at her office, where she counseled so many. Everyone left with an envelope. In one interview, Maria said “I feel blessed coming here with very little. G-d has helped me to become successful, so I feel I should share it with people who cannot afford an education and the important things in life. That is my philosophy.” The most important part of Maria’s life was her family and making sure they all received a quality worldly and Jewish education. Her husband Fred Devinki passed away in 1993, and her mother Regina Rosenberg Braun passed away in 1967. Maria is survived by her daughters, Ida Kolkin and her husband Craig Kolkin of Leawood, Kansas; Karen Pack and her husband Steven Pack of Prairie Village, Kansas; and her son Sam Devinki and his partner Mary Stahl of Leawood, Kansas. Maria was blessed with seven grandchildren and two great-grandchildren, Richard and Jennifer Devinki, of Woodland Hills, California; Reggie and Jonathan Fink and their children Kayla and Nate Fink, of Armonk, New York; Zachary and Amy Pack of New York, NY; David Pack, of New York, NY; Ethan Pack of Los Angeles, California; and Elle and Josh Kolkin of Leawood, Kansas. The family would like to thank Maria’s doctors and nurses for their loving care, and especially her caregiver, Georgia Lewis.

The family of Maria Devinki created this Life Tributes page to make it easy to share your memories.