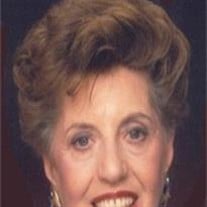 Marie Rosner, 89, passed away Thursday, February 7, 2013 at Village Shalom. Funeral services will be 11:00am Sunday, February 10, at The Louis Memorial Chapel, 6830 Troost Ave. Burial Sheffield Cemetery. Kindly omit flowers. The family suggests contributions to Hadassah, c/o M. Kaplan, 3909 W. 101st Terrace, Overland Park, KS 66207, Village Shalom or a charity of the donor’s choice. Marie was a lifelong area resident, the daughter of Gershon Gotlieb and Rose (Fish) Gotlieb. After her father died, she became the daughter of Ben Fogel when her mother remarried. She attended Kansas City schools, graduating from Central High School. Marie married her loving husband of 57 years, Phil, in 1944. Marie was very active in both the Jewish and secular community. She was a member and past-officer of the Kansas City chapter of Hadassah and managed their bargain centers at both the Wornall and Main locations. She was a very active volunteer for the City of Hope Hospital. She was a member of Kehilath Israel Synagogue and its Sisterhood, the Czechnowitz Relief Society, Marcella Rodin Club and Club 100. She gave her time to additional causes in the community. When Phil became ill she stepped in to run the family business, American Felt. Marie was family oriented and gave a great deal of time and energy to family gatherings. She was preceeded in death by her parents; her husband of 57 years, Phil; brothers: Martin and Phillip Gotlieb; sisters: Sara Shorr, Esther Gotlieb and Dorothy Levy. Marie is survived by daughters and son-in-law: Gloria Rosner Gale, Barb and Steve Stras, all of Overland Park, KS; grandson: Jacob “Jake” Stras, Las Vegas, NV; granddaughter: Britt Gale, Portland, OR; sister-in-law: Shirley Gotlieb Frankowitz, Dayton, OH. Marie will be greatly missed by her children, grandchildren, extended family and her many friends. The family would like to thank Kansas City Hospice and Village Shalom for their loving care.

The family of Marie Rosner created this Life Tributes page to make it easy to share your memories.