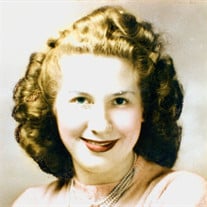 Marilyn Drew Mendelson passed away on Saturday, May 14 after a long bout with Alzheimer’s disease. She was 90, born on October 12, 1925. She will be remembered as a kind, loving and generous mother and a loving wife to her husband Harry Mendelson, who preceded her in death in 2000. Marilyn was born and raised in Kansas City and lived there until 2005 when she moved to Sacramento, California to be close to her eldest son, Drew. Her parents, Walter and Lucille Drew – both from Ukraine – had immigrated to the US as children. Walter had gone into the hardware business with his father Jacob Drew. Marilyn, her parents and her brother Allen had endured the Great Depression by operating dry goods stores in communities in Missouri north of Kansas City. She was married in 1944 to Harry Mendelson, also of Kansas City, and they had three sons, Drew, Bruce and Scott. Harry was an engineering draftsman, who most of his working life was employed at the Colgate Palmolive plant in Kansas City, Kansas. Their marriage endured for 56 years. Marilyn had a soft and sweet singing voice and had early on aspired to be a professional singer. She performed for a time with jazz bands in Kansas City. She decided on marriage instead of a career but retained a lifelong love of music, particularly her favorite, jazz. In later years, even with her memory slipping, she would still sing beautifully, rendering songs from the 1940s, Yiddish folk songs and other music she recalled from her teenage years. Marilyn was a homemaker while her sons were young. When they were in their teens, she took a job at Pyramid Life Insurance as the private secretary to the president and held that job for more than a decade before retiring. She and Harry loved to travel. They toured Europe, Israel and many places in the US and Canada. One of Marilyn’s most beloved photos is of her and her three sons perched on a bench at the Grand Canyon in the summer of 1956, the four of them looking out over the canyon’s rim. Marilyn is survived by her three sons, Michael Drew Mendelson, Bruce David Mendelson and Scott Douglas Mendelson, along with grandchildren, Kelly Biggs, Bowen Mendelson, Ethan, Erin and Laurel Mendelson, Alexandra Smirnov and Eric, Max and Jacob Mendelson. She is also survived by great grandchildren, Shayne and Baley Biggs, Tillie and Knox Mendelson and Kevin Smirnov. Funeral services will be 10:30am Thursday, May 19, 2016 at Louis Memorial Chapel, 6830 Troost Ave, Kansas City, MO. Interment will be at Sheffield Cemetery. In lieu of flowers, the family suggests contributions to the Alzheimer’s Association at alz.org.

Marilyn Drew Mendelson passed away on Saturday, May 14 after a long bout with Alzheimer&#8217;s disease. She was 90, born on October 12, 1925. She will be remembered as a kind, loving and generous mother and a loving wife to her husband Harry... View Obituary & Service Information

The family of MARILYN DREW MENDELSON created this Life Tributes page to make it easy to share your memories.

Marilyn Drew Mendelson passed away on Saturday, May 14 after...