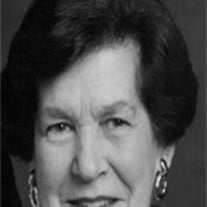 Marjorie Jacobs passed away on Friday, November 27, 2009 surrounded by her family. A celebration of her life will be at 3:30pm, Sunday November 29, 2009 at Village Shalom, 5500 W 123rd St, Overland Park, Kansas, 66209. Kindly omit flowers, the family suggests contributions to the the Village Shalom Employee Holiday Gift Fund in Marjorie’s memory or Kansas City Hospice and Palliative Care, 9221 Ward Pawkway, Kansas City, MO 64114. Cremation is planned. Marjorie and her twin sister were born in Kansas City, Missouri on June 24, 1916 to Beatrice (Hyman) and Max Block. After attending Kansas City Junior College Marjorie trained as a medical technologist at Menorah Medical Center and worked in this field for many years at various facilities including the Kansas Neurological Hospital and the Alfred Benjamin Dispensary. She accompanied her husband to Georgia and Maryland for his internship and residency programs and then they returned to Kansas City and started their family. Marjorie was a lifelong member of The Temple, Congregation B’nai Jehudah where she was confirmed, married and a member of the Sisterhood. She was also an active member of the National Council of Jewish Women and Hadassah and was an active volunteer at Menorah Medical Center for many years. Marjorie’s focus in life was her family; her devotion to them was well known and limitless. Her interests and hobbies over the years included bowling, golf, tennis, reading and Mah Jong. Called “Marj” by many friends and often Margie by her family, she was outgoing, good-natured, thoughtful, and nurturing. he also had an enjoyable sense of humor with a quick wit. Marjorie was considered a survivor after overcoming several life-threatening-illnesses; she was widely admired for her positive attitude toward life. She will be deeply missed. She was preceded in death by her brothers James (Rae) and Allen Block. She is survived by her husband of nearly 70 years Morton; daughters Patty (Gene) Settle of Tucson, AZ and Julie (Greg) Sizemore of Leawood; four granddaughters, Kristin (Steve) Schneller, Whitney and Merritt Sizemore and Jamie Settle; twin sister Betty Jackson, St. Joseph, MO; and several nieces and nephews. The family would like to thank the staff at Village Shalom for their exceptional care of and love they showed for Marjorie.

The family of Marjorie Block Jacobs created this Life Tributes page to make it easy to share your memories.