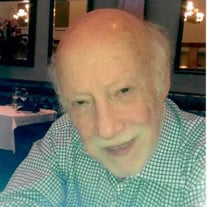 Marshall Edwin Talbot, age 87, died May 3, 2022. Marshall was born June 18, 1934 in Kansas City to Serena and Harry Tabolsky. He attended Faxon and William Rockhill Nelson Grade Schools and graduated from Paseo High School in 1952 with membership in the National Honor Society. Marshall attended the University of Oklahoma where he received his degree in Geological Engineering. During his college period he was named one of the ten top Freshmen Men at OU and was president of his college fraternity, Pi Lambda Phi. He was also selected to be a member of various honorary geological and engineering societies. Marshall began his work career in 1957 as an engineer with Shell Oil Company in Houston. In January, 1959, he married Hope Raskin of Phoenix, his wife of 63 years. In 1960, Hope, Marshall and their daughter, Tracy, moved to Kansas City where Marshall attended night law school at UMKC. Upon admittance to the Missouri Bar in 1965, Marshall joined the Federal Reserve Bank of Kansas City as its Trust Examiner responsible for all of the Federal Reserve District’s trust bank exams. In 1971, Commerce Bank hired Marshall to manage its corporate trust department. In 1979, he was elected president of Investors Fiduciary Trust Company, a bank jointly owned by DST and Kemper Financial Services. During this time Marshall was a member of the downtown Rotary Club of Kansas City, president of Dag Hammarskjhold B’nai Brith Lodge and vice president and trustee of The Temple, Congregation B’nai Jehudah. Marshall changed career directions in 1981, seeing a need to help families with their personal financial planning. He became a certified financial planner and registered principal with a local securities broker. Subsequently he began doing due diligence work for the brokerage firm and later, with a national presence in this work, performed due diligence on investments for securities brokers throughout the country. Marshall continued this activity for over 36 years. Marshall always wanted to travel and travel he did starting at age 13. He enjoyed talking about his teenage summers in the Colorado Mountains and road trips throughout the western United States. In later years his business activities caused him to visit every area of the country. He and his family toured both the East and West Coasts as well as Canada. Marshall and Hope took numerous trips to Europe, Asia and Central America. Marshall enjoyed gardening, reading and attending classical concerts. But his biggest enjoyment was his weekly poker games which dated back prior to 1970. Marshall was preceded in death by his daughters, Wendy Talbot and Tracy Mopper. He is survived by his wife, Hope, granddaughter, Rachel Mopper of Orange County, son-in-law, Robert Mopper of Chicago, and Marshall’s sister and brother-in-law, Barbara and Herb Si¬mon of Leawood, as well as cousins, nephews and nieces. Services will be held at 3:00pm, Thursday, May 5, 2022 at The Louis Memorial Chapel, 6830 Troost Ave, Kansas City, MO 64131. To join by zoom, please email [email protected] for zoom link and passcode. Burial to follow in Rose Hill Cemetery. In lieu of flowers, the family suggests contributions to The Wendy Talbot Endowment Fund c/o KU Endowment, PO Box 928, Lawrence, KS 66044, Pancreatic Cancer Action Network, 1500 Rosecrans Ave, Suite 200, Manhattan Beach, CA 90266 or to a charity of one’s choice.

The family of Marshall Edwin Talbot created this Life Tributes page to make it easy to share your memories.