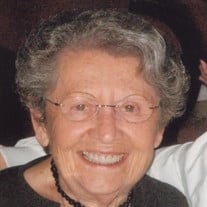 Martha Glickstein Cohn, 90, beloved mother, grandmother, great-grandmother, and aunt to many nieces and nephews, passed away Monday, December 7, 2015 at Brookdale of Overland Park. Graveside services will be at 11:00am Thursday, December 10, at Rose Hill Cemetery. Contributions in Martha’s memory can be made to the Bernard and Esther Abend Glickstein Scholarship Fund, Jewish Community Foundation, 5801 W. 115th St., Suite #104, Overland Park, KS 66211, or to a charity of one’s choice. Martha was born July 31, 1925, in Dubienka, Poland to Bernard and Esther (Abend) Glickstein. The family immigrated to Kansas City, Missouri in September, 1938 with the help of her uncle, Sam Abend. Martha married Sidney L. Cohn on February 1, 1948 and raised their two daughters in Prairie Village, KS. Family was most important to Martha. She and Sidney traveled often so that they were present at family life cycle events all over the country. Martha established the Wendie Ann Toy Company, which she operated out of her home for many years. She actively participated in her daughters’ schools’ PTAs and served as a Brownie and Girl Scout leader for both of her daughters. Martha volunteered with Hadassah and the Sisterhoods at Kehilath Israel Synagogue and The Temple, Congregation B’nai Jehudah. She also enjoyed her weekly mahjongg games. When Sidney retired, they enjoyed traveling with friends. Martha was predeceased by her husband of 65 years, Sidney Cohn; her parents, Bernard and Esther Glickstein; brother and sister-in-law, Aaron Glickstein and Connie Glickstein Emery, and sister and brother-in-law, Sylvia Glickstein Merkadeau and Ronald Merkadeau. She is survived by her daughters, Judith (Laurence) Mayer of Overland Park, KS and Marilyn (Tom) Gillman of Tucson, AZ; granddaughters, Alison Mayer and Jennifer (James) Reidy, all of Chicago, IL; great-granddaughter Shiloh Reidy of Chicago, IL and many nieces and nephews. Martha was a member of Kehilath Israel Synagogue and the Temple, Congregation B’nai Jehudah. The family would like to express our thanks to Dr. Alexander Davis and his staff. Also thanks to the staffs of Brookdale of Overland Park, and Kansas City Hospice and Palliative Care. Martha loved sipping wine with her dinner. In honor of a life well lived, please raise a glass of wine in her memory.

Martha Glickstein Cohn, 90, beloved mother, grandmother, great-grandmother, and aunt to many nieces and nephews, passed away Monday, December 7, 2015 at Brookdale of Overland Park. Graveside services will be at 11:00am Thursday, December 10,... View Obituary & Service Information

The family of MARTHA GLICKSTEIN COHN created this Life Tributes page to make it easy to share your memories.