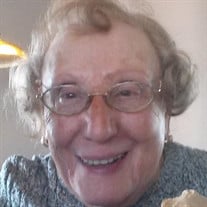 Martha Fleitman, 96, of Overland Park, KS, passed away Tuesday, April 24, 2018 at Village Shalom. Graveside services and burial will be 10:00 am Friday, April 27, 2018 at Kehilath Israel Blue Ridge Cemetery, 1901 Blue Ridge Blvd, Independence, MO 64052. In lieu of flowers, the family suggests contributions to Kehilath Israel Synagogue or to a charity of one's choice. Martha was born in Fremont, Nebraska on December 14, 1921, the daughter of Harry (Herschel) and Minnie Cohn. She grew up speaking Yiddish and first started using English when she attended elementary school. Martha married Harry Fleitman on November 20, 1949, eventually raising three children. Martha and Harry were married for 61 years before he passed away in 2011. Martha devoted herself to her family and the Jewish community that she loved. She was a lifelong member of Kehilath Israel Synagogue and its Sisterhood. She also served as a Vice President. Martha was on the synagogue board and co-chair of the annual gift wrap fundraiser. She received the Ayshet Chayil Award in 1987, in 1992 she received the Men’s Club Tribute Award and in 1997 was named Volunteer of the year at Kehilath Israel. Martha retired from the kitchen in 2009 after 23 years of volunteer catering. She was caring and kind, always helping others. After raising their children and retiring, Martha and Harry spent time with their 7 grandchildren and traveled the world together. Martha was preceded in death by her parents and her husband, Harry. She is survived by her daughter and son-in-law: Sharon Fleitman and Dr. Eric Solomon, Atlanta, GA; sons and daughters-in-law: Bernard and Judith Fleitman, Princeton, NJ; Marshall Fleitman and Tung Hsiu Chang, San Francisco, CA; grandchildren: Rachel and husband Kelly Ng, Adina Solomon and husband Kevin Grommersch, Ari Solomon, Yonah Solomon, Shira Solomon, Jessica Fleitman and Dana Fleitman. She will be greatly missed by her family and many friends. The family would like to thank Village Shalom and their staff for all the care and support provided to Martha allowing her to fulfill her last years.

The family of MARTHA FLEITMAN created this Life Tributes page to make it easy to share your memories.