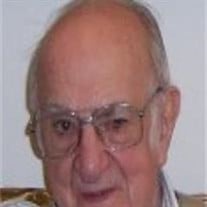 Martin Levy, 87, passed away October 20, 2010 at Menorah Medical Center, Overland Park, KS. Services will be held at 2:00pm Friday, October 22, at The Louis Memorial Chapel, 6830 Troost Avenue with burial at Rose Hill Cemetery. Kindly omit flowers, with family suggesting contributions to the Cub Scouts, Attn: Rudi Stevens, c/o FRMS, PO Box 88, Butler, Missouri 64730. Born in Kassel, Germany on May 11, 1923 to Rosa and Salomon Levy (Loewy), Martin spent his early years in Buehne, Westfalen, receiving education through the 8th grade at a number of different schools due to imposed restrictions. He was brought to the United States at the age of 14 in Aug. 1937 by his father, under sponsorship of his uncle Paul Levy, living with relatives in Butler, Missouri. His father returned to Germany, arriving back in the United States with Martin’s mother in 1940. Martin spent the next several years attending the local Butler schools, playing football, learning English, graduating from high school in 1942. During this period he began his long association with the family business, the Sam’l Levy Mercantile Company. Martin began attending Oklahoma A&M during the fall of 1942 but was drafted into the US Army in the spring of 1943. He spent the war years at a number of different training facilities and ultimately found himself back in Germany within an Engineering unit, later acting as an interpreter within the Military Government. Upon his return to the US, Martin renewed contact with Judy (Ursela) Weil, a second cousin from Borgentreich, Germany then living in New York. Judy and Martin were married in Kansas City in July, 1946. Martin joined the family business in Butler, an association he retained for 58 years until its closure in 2002. During the ensuing years, in addition to working and raising his two sons, Martin became very involved in many local and civic activities, being a long time supporter of Boy Scouts, lifetime member of the Butler Lions Club, charter member of the Jaycees, active participant in the Butler Chamber of Commerce. Martin accumulated many awards for his civic contributions, including scouting’s Silver Beaver. A persistent theme in Martin’s life in the US was his striving to be American as he became an ardent follower of sports, loved traveling around the country and enjoyed visiting with relatives and friends. Martin was a long standing member of The Temple, Congregation B’nai Jehudah. He was preceded in death by his wife 0f 62 years, Judith (2008). Martin is survived by two loving sons, Dr. Charles S. Levy, Washington D.C. and Dr. Mark A. Levy (Dr. Ruth Mayer), Wayne, PA, and three grandchildren, Benjamin, Alexander, and Rachel. Martin will be missed by his many relatives, friends, associates, and acquaintances, alike.

The family of Martin Levy created this Life Tributes page to make it easy to share your memories.