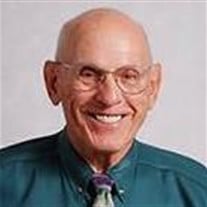 Marvin Paul Gibian, 88, of Leawood, KS, passed away Monday, October 12, 2015 at the Kansas City Hospice House. Funeral services will be at 1:00pm Wednesday, October 14, at Beth Shalom Synagogue, 14200 Lamar, Overland Park, KS 66223 with burial to follow at Mt. Carmel Cemetery. In lieu of flowers, the family suggests contributions to Beth Shalom Synagogue or Hyman Brand Hebrew Academy. Marvin was born at home, in Kansas City, MO on October 5, 1927, the only son of Esther and Ben Gibian. He was a fourth generation member of Beth Shalom Synagogue, serving as President of the congregation, its Men’s Club and Couples Club. Marvin served on the board of the Jewish Community Center of Greater Kansas City, was chairman of the Guardian Society and vice president of the Jewish Federation of Greater Kansas City. He was an Eagle Scout in Troop 61 and was a warrior in the Tribe of Mic-O-Say. Marvin was a co-owner, with his father, of Oakwood Sportswear until his father’s death in 1964. He then began his banking career of over 50 years, at Mercantile Bank, becoming vice president of commercial lending. After a 6 month retirement, he joined the Bank of Blue Valley in 1996 as vice president of business development until September, 2015. Marvin was a devoted husband, father, grandfather, great-grandfather, uncle, cousin and loyal friend. He was an avid runner and completed many marathons. He loved gardening, being outdoors and following his 2 favorite teams, the Royals and the Chiefs. Marvin was a strong supporter of Israel, traveling there over 50 times. He was a mentor to many. Marvin was a blood donor and inspired others to do the same. Marvin was a founding member of the Leawood Chamber of Commerce and a member of the Leawood Rotary Club. He valued education, continuing his own throughout his life. Marvin was a member of the ROMEO’s and the Ambassador Club. He was preceded in death by his parents; his sisters: Marjorie Leener, Lucille Ellis and Shirley Movitz. Marvin is survived by his wife of 66 years, Evelyn Gibian; daughters and sons-in-law: Linda Gibian and Mark Fishman, Overland Park, KS; Ellen and Jeremy Fenster, Jerusalem, Israel; grandchildren: Jacob Gibian Fishman, Levi Gibian Fishman and his wife, Angela Jeffers, Esther Gibian Fishman, Bracha and Moishie Krohn, Binyamin and Rochel Fenster, Sarah and Yehuda Kornfeld, Kyla and Yakov Norman, Malka and Meir Avraham, Chani and Duvie Shapiro, Uri and Goldie Fenster, Akiva and Tehila Fenster, Rachel Fenster and 31 great-grandchildren. The family wishes to extend its thanks to Dr. Elliott Franks, his friend and doctor and to Bob Regnier and the Bank of Blue Valley for making the second chapter of his career so much fun.

The family of MARVIN PAUL GIBIAN created this Life Tributes page to make it easy to share your memories.