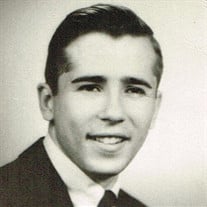 Marvin Frank Goldstein, M.D. 84 of Kansas City, Missouri died peacefully on July 3, 2018 at the St. Joseph Medical Center. Marvin was born in Kansas City, Missouri on March 31, 1934. He was the eldest child of Sam and Rose Goldstein. Sam and Rose immigrated to the United States from Lithuania. An Eagle Scout, Marvin had a thirst for knowledge and was stellar student. He attended Central High school and graduated from the University of Missouri. He continued his education at the University of Missouri Medical School. It was there that he met his future bride, Adelle Zeldin. They married on June 21, 1959. He then attended his post graduate ophthalmic studies at the University of Pennsylvania and completed his residency in ophthalmology at the University of Missouri Columbia. Marvin served as a captain in the U.S. Army serving in Vietnam from 1966-1967. He received numerous commendations for his service. He opened his medical practice in 1968 and was beloved by the thousands of patients he cared for until he retired. Marvin generously gave of his time and professional services volunteering on weekends at the Wayne Minor Clinic. He coached his daughter playing softball and his sons playing baseball. He highly valued Jewish education and was a devoted member of Congregation Beth Shalom. He is preceded in death by his parents, Sam and Rose Goldstein; father-in-law, Hyman Zeldin; brothers-in-law, Stanley Silberg, Nathan Saltzman, Bert Zeldin and Abe Grundstein. He is survived by his wife of 59 years Adelle Goldstein; his two sons, Bruce Goldstein (Debbie Minkin), Alan Goldstein (Megan Gormley); daughter, Stephanie Eisenbach (Rabbi Daniel Eisenbach), mother-in-law, Sarah Zeldin; sisters, Irene Silberg and Zelma Saltzman; brothers-in-law, Stan (Joyce) Zeldin, Bob (Jean ) Zeldin, and sister-in-law, Estelle Grundstein. Marvin was a loving grandfather to his 12 grandchildren; Rochel (Daniel), Shalom (Tehila), Rivky (Aryeh), Yoni (Rella), Chaim, Katie, Yaakov, Ethan, Isabelle, Jessie, Avrumi, Caleb and 9 great-grandchildren. Funeral services will be held at 10:00am Thursday, July 5, 2018 at the Louis Memorial Chapel, 6830 Troost Ave, Kansas City, MO. Interment will be at Mt. Carmel Cemetery. In lieu of flowers, memorial contributions may be made to Congregation Beth Shalom or a charity of the donor’s choice.

The family of MARVIN FRANK GOLDSTEIN, M.D. created this Life Tributes page to make it easy to share your memories.