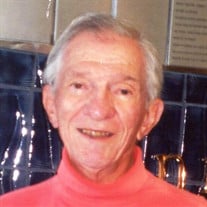 Marvin Orlovick, 91, of Kansas City, MO, passed away Sunday, September 14, 2014. Funeral services will be at 11:00am Tuesday, September 16, at the Louis Memorial Chapel, 6830 Troost Avenue, with burial to follow at Kehilath Israel Blue Ridge Cemetery. In lieu of flowers, the family requests contributions to Kehilath Israel Synagogue, CASA or Children’s Mercy Hospital. Marvin was born August 23, 1923 in St. Louis, MO, the son of Sam and Becky (Bennett) Orlovick. In 1946, after being discharged from the U.S. Army Air Corp, he moved to Kansas City and married Esther (Liber), who passed away in 1978. He married Toby (Levene) in 1982 and she passed away in 2013. Marvin retired after 38 years as a partner in Friendly’s Furniture and Clothing. He was an active community volunteer for Children’s Mercy Hospital and CASA (Court Appointed Special Advocate). He was a member for over 50 years in the Kansas City B’nai B’rith Bowling Association. He was a past president of the Kansas City as well as the National Association. Marvin has been a member of Kehilath Israel for over 60 years. He held a variety of posts including Scoutmaster of Boy Scout Troop 53, President and Secretary of the Men’s Club, and served on the Synagogue’s Board of Directors. He was also a long-time member of the Jewish War Veterans. He was predeceased by his parents, his brother Henry Orlovick, sister Evelyn (Orlovick) Fogel and spouse Harry, and both wives, Esther and Toby. Marvin is survived by his older brother Edward “Eddie” Orlovick (Goldie) of St. Louis, his daughter Sandra Robinson (Mark), son Bruce Orlovick (Faye), six grandchildren Joli (Robinson) Fridman (Ruben), Brian Robinson (Christa), Sarah (Orlovick) Bueno, Matthew Orlovick, Eric Levene and Ian Levene; 3 great-grandchildren Nina Fridman, Maya Fridman and Adi Robinson, many nieces, nephews and cousins.

The family of Marvin Orlovick created this Life Tributes page to make it easy to share your memories.