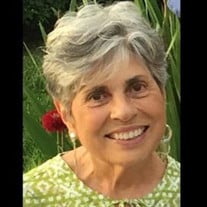 Mary Elizabeth Davidson was born in Kansas City, Missouri, on May 28, 1936, to loving parents Julian K. Davidson and Kathryn E. Roberts. Mary passed away peacefully on December 6, 2021, forever leaving her imprint on many worthwhile causes across the Kansas City region. Mary’s spark for life, driven personality, and love of the arts were a marvel to all those fortunate to know her. Mary’s bright eyes and warm smile touched the hearts of many. She loved working and giving back to the community and was a mentor and inspiration to many. Mary graduated from the University of Missouri at Columbia with a Bachelor of Science degree in education in 1958. She received her master of arts in science education from Columbia University in 1962 and her doctorate in education administration from the University of Kansas in 1977. Mary taught fifth, sixth, and seventh grades in the Kansas City, Missouri school district and taught science for grades K-7 for the Kansas City School District’s educational television station KCSD—TV Channel 19. She also hosted programs called “Something of Interest” on cable and “It’s our Community” for the Johnson County Community College. Mary was assistant to the vice chancellor for academic affairs at the University of Kansas Regents Center from 1976 to 1992 and served as the assistant director of the William T. Kemper Foundation from 1993 to 1997. In March 2002, Mary was appointed by the United States Secretary of Education under President George W. Bush to be the Secretary’s Regional Representative for Region VII. This region included Iowa, Kansas, Missouri, and Nebraska. Mary served as the liaison to state and local agencies, colleges and universities, and public and private schools. Mary was a champion for education. Mary and her late husband, Barton Cohen, were long-time supporters of Johnson County Community College and its Nerman Museum of Contemporary Art. They both loved supporting Kansas artists, and in 2005, an artist space at the museum was named the Barton P. and Mary D. Cohen Gallery to highlight regional art, followed by the creation of the Barton P. and Mary D. Cohen Art Acquisition endowment in 2009. Mary was named Johnson County Community College’s Johnson Countian of the Year in 2015, a well-deserved recognition for her years of work to support the local community. As a volunteer, Mary served as chair of the Board of Overseers for the U.S. Coast Guard Academy, receiving the Coast Guard medal for meritorious public service. She served as the president of the Overland Park Rotary Club, president of the Overland Park Rotary Club Foundation Board, commissioner of the Kansas City Area Transportation Authority, commissioner of the Overland Park Planning Commission, and chaired the Johnson County Community College Foundation Executive Committee. She served as chair of the National World War I Museum Board of Directors and as interim president and CEO of the National World War I Museum. Most recently, she was a member of the executive committee of the Freedoms Frontier National Heritage Area Board of Directors, served as the Chair of the Board of Directors for the Kansas City Museum, and served on the governance board of the Children’s Campus of Kansas City, Kansas. Mary served as Co-trustee with Midwest Trust Company of the Barton P. Cohen and Mary Davidson Cohen Charitable Funds donating to many worthy causes. Always striving to make an impact, she never officially retired and kept using her gifts to support her beloved community. Mary was preceded in death by her parents and husband Barton P. Cohen. She is survived by the light of her life, her son, John Davidson, and adoring Havanese dog, Rufus, along with countless friends and loved ones. In honor of Mary, please teach a child, thoughtfully listen to others, love your neighbor, enjoy music, treasure art, and try to make the world a better place. In lieu of flowers, please make donations to The Kansas City Museum or Johnson County, Community College. Services will be at 9:30 AM Friday, December 10, 2021, at The Temple Congregation B’nai Jehudah, 12320 Nall Ave., Overland Park, KS 66209. https://vimeo.com/654297436/2ebd51fa76 please visit this link to attend virtually for the live stream of Mary’s funeral service at 9:30 AM on December 10, 2021.

Mary Elizabeth Davidson was born in Kansas City, Missouri, on May 28, 1936, to loving parents Julian K. Davidson and Kathryn E. Roberts. Mary passed away peacefully on December 6, 2021, forever leaving her imprint on many worthwhile causes across... View Obituary & Service Information

The family of Mary E. Davidson created this Life Tributes page to make it easy to share your memories.

Mary Elizabeth Davidson was born in Kansas City, Missouri, on...